B for Better ...and B for Barbados!


I once read somewhere that cursing and swearing can actually make you feel better - physically, even! I wanted to make sure I wasn't telling you nonsense, so I found you this article on the topic. It's in the entertainment section of the news, but it's still news. And I can personally vouch for the veracity of the statement, at least when it comes to emotiona relief. I swear I felt better yesterday as soon as I hit publish on my f'ck-fest there... Sure, it wasn't the nicest or most reader-friendly post out there and I didn't exactly hold back, but I've told you before that I would be honest. And travelers have their bad days too - it's not like this is the first one, right? I'm not going to lie to you.

That's why I can also honestly tell you that I am much better today. Like, really, much MUCH better.

It already began during the night, because with the new sheets I slept so much better than I had before. I still look weird - like I'm wearing a polka dot unitard, that's what I posted on Facebook and Twitter today - but at least I don't suffer as much from all the bites and stings. And I'm less cranky, because I had my rest. Necessary rest, really, I think even the fever is completely gone now, or at least I didn't feel it much today. The cold is finally in it's last stage, too. You know how after a while of observing yourself you start to really understand what goes on inside you and it lets you anticipate what's going to happen next? Well, I might not be very good at taking care of myself, but I know what it means like when I feel a certain way. And when I have a flu, the throat is always the last part that joins the fun. So the fact that I now walk around coughing and hoarse is actually really good! Not because I'm a masochist, but because it means it's going to be over soon. No more meds for this girl - and I can finally go to the beach!

Oh but Isa, what about climbing up and down that steep hill? Weeeell, that's also not a problem anymore, because I'm no longer in St. Lucia. I'm in Barbados now and this island is flat as my chest when I was ten! (Only I can make this joke, so don't even think about it.)

This morning, Alex and Monica from the guesthouse took me to Vigie, the northern airport of St. Lucia, the one I also arrived at. I did my check-in at the LIAT desk - I like that cute little airline, it's little and cute - and when I asked if I could be assigned a window seat, the guy at the counter told me that it was going to be free choice of seat. I've only flown LIAT once before and I don't remember what it was like then, so I can't say if this is their standard practice or if they only did it for this flight or this type of airplane, but it made me a little nervous, because I really, really don't like middle or aisle seats. Only a little, though, because it was a short flight anyways.

As I still had a lot of time, I went and got breakfast. Where? Can you guess? Yes, in Trinidad! Well, in Rituals. But they are Trinidadian so it was like going back there for a coffee and a croissant. Wonderful. And I got to go online and charge my laptop and all that in a really comfy and really big chair. In Trinidad! I still had time to change my remaining XCD to BBD and then spend the coins they wouldn't take on cookies. Mmm cookies! I still have them, they'll be tomorrow's breakfast.

When the time came to get on board the flight I was happy about two things. One of them, you should be able to guess right now. First, it was one of the small planes again, with only 50 seats and propellers. I love those small things! Second, I got the seat I wanted. No, actually I didn't. Let me rephrase that. I got a seat that was even better than the one I'd had in mind. Oh, yes...

I was hoping to get a window seat in one of the first five rows, but being realistic, I was prepared to go for any window seat at all. And if all were taken, any aisle as far ahead as possible. But. BUT! Everyone was immediately walking towards the back of the plane, I couldn't tell why, so the first one and a half rows were still empty. One and a half? Patience, you're about to find out what I mean. Confused, I asked the flight attendant if it was OK to take a seat in the front and she said yes, so I sat down in what I believe was 2F. I don't really know, because I was so blown away by where I was about to sit down, I never looked at the sign indicating the number and letter of the seat. Here's why I say one and a half rows and why I was so excited: 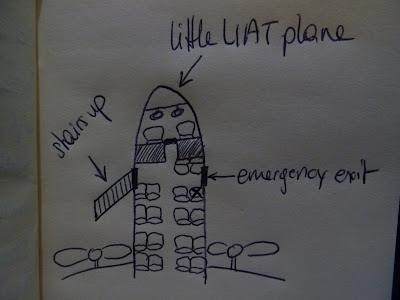 X marks the spot! And I promise, I won't make a habit out of drawing for you.

Yes! Not only did I have a window, not only was I in the very front of the plane, not only did I have endless legroom - I actually had seats in front of me, facing me, empty, that I could rest my feet on so I'd be even more comfortable! How crazy is that? That was definitely one of my Top 3 favourite flights ever. 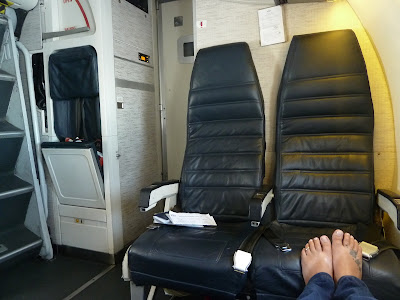 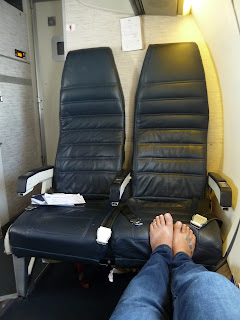 And another one, cos it's so nice.

Let's just say I really enjoyed that flight. And as much as I liked LIAT before today, I like them even more now. And that little thing, being in this great seat and being able to really stretch out and read my book during the flight, that just changed everything. From then on, I was completely healed of yesterday's wounds.

The rest of the day was quiet, but in a good way. I got to the guest house, Rio it's called, located in St. Lawrence Gap, and moved into my room. It's a simple place and a simple room, but it's exactly what I need, not more and not less. And the girl who worked the front desk today was really nice.

Found this while taking a walk around the area, this is your invitation to come too: 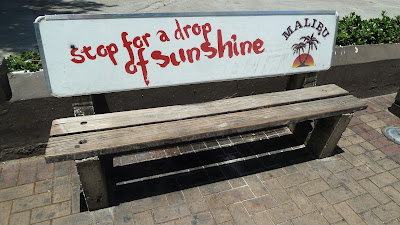 Malibu is from Barbados!

The guest house is a block from the beach, which is another advantage beside the low price and the I-fulfill-your-needs-ness of the place. And that beach, oh man, that beach. It is white! And the sea, guess what, it's blue! But really blue, even bluer than in Sint Maarten, remember that picture? I can't recommend that beach to everyone, though. I can't recommend it to slow or weak swimmers, because the sea is rough down here. Those waves had me under the water twice today!

Bartender: Would you like anything to drink, miss?
Me: No, thank you. I just had two litres of sea water.

It was good, though. Even though I swallowed a lot of salt water and lost my hairband. I think I really needed that, to be in the water again. I'm glad I'm so close to the beach here, so I can just go whenever I feel like it. I'm a lot calmer now and even though I'm still sick, it doesn't bother me as much, because the rest of the situation is better now. To be able to move freely, you don't know how important that is until one day you can't. I don't care if it makes me sound like a lazy bum, because I know I'm not even if I sometimes jokingly say it myself, that hill was a problem. Glad that's out of the way now - literally. And tomorrow I'll go and get you some pictures of the beach, too. I didn't forget, I just didn't know if the beach was safe to bring valuables. Well, it seems it is.

After coming back from the beach I just relaxed for a while and then I went out to dinner with a guy from the guest house. He was going to go get food at the same time that I was heading out, so we joined forces and went together. I had grilled mahi mahi and vegetables! Real food! Warm food! Actual fish and vegetables! No more packed bread and plastic cheese. Not that I don't like that stuff, but having real food from time to time, well, nobody can say that's bad for you.

Now that I told you my story of the day, I'm going to go back to my room. A) because I want to lie down with my book and B) because I'm sitting on the balcony of the guest house right now and it might close in a little bit. It's after ten already, so I don't know what's up, but have a look at this: 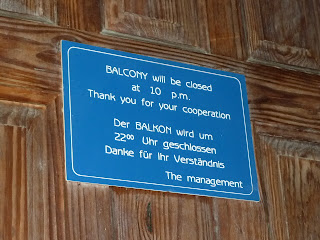 Why the hell is that in German?!


PS: About Saint Lucia... I have not, I repeat NOT written that place off. It definitely deserves another chance. I won't go back soon, because there's still so many other places I want to visit before I re-visit anywhere (with the exception of TT). But I do hope that I'll get to go back. And I definitely recommend Saint Lucia to anyone interested in visiting a Caribbean island. It's beautiful! Just make sure that you don't stay on top of the hill without a car.