You have been paying attention, right? So you know where I am right now, right?

OK, where am I? Yes, that is correct!

Before coming here, I was warned. By many people, actually. They said to go to Jamaica, but not to Kingston, just anywhere else on the island. They said to be really careful, because it was such a dangerous place. They said not to take public transportation by myself, walk around by myself or talk to people in the street. They said to change my ticket and please just not go.

I am so glad I did not listen!

Don't get me wrong, I did listen, just no to them. I listened to the CouchSurfer who's hosting me right now. (Of those extreme warners, only one was a CouchSurfer and he did just a general "be careful" not a "don't go" kind of warning.) I asked him what to make of all the warnings and negative information I was getting and he basically confirmed that I was right with what I'd been thinking. Here's what he wrote:

Why did I even ask, if I already thought that it was going to be fine? Here's why, that's my reply to his message:

It all comes down to this: don't be scared, but don't be stupid either. It's that simple. It's what I tell people every time somebody asks me about safety in Colombia before their first trip to that wonderful, beautiful, heartbreakingly stunning country. I have three rules that apply to everywhere. I'm rephrasing them here in a way that I wouldn't usually use when I talk to friends, so bear with me if I sound strange now. But you know, I'm feeling all smart right now and like I'm an authority of sorts on that topic, so I make them catchy, so you can remember. Because, obviously you're going to want to remember, there is so much you can learn from me, highly experienced traveler that I am and little mouse that you are... you're all looking up to me and waiting for me to share my infinite wisdom with you, right? No, jokes aside, what if somebody reads this who really isn't an experienced traveler? Then they might want to remember these three rules, because I really do think they're good and I haven't seen them in any guide book. So here we go.

- If somebody tells you not to go to a place, you do not go to that place. In safe places, like Austria, for example, you will sometimes be told not to go to a certain area in a city, because it's shady or even dangerous (I have heard that word used about some parts of Vienna, what the hell?!). You can ignore that. No place in Austria is dangerous. And most places in other countries like Austria aren't dangerous either. Now, over here is obviously different. 99% of the country, be it Colombia or Trinidad or Jamaica or wherever, will be just as safe as anywhere else, but you do get that 1% that sucks. So if we're in Cartagena and I tell you not to go to some barrio or another by yourself, then you will not do that. And here, if my host tells me not to go to some place by myself, then I will stay away and not even think about going. If you still go, you're not cool and you're not a hero, you're stupid. Might that nothing would have happened anyways, but why would you gamble on something like that?

- Don't be an asshole. One of the reasons so many of the developing countries (How I hate the expression "third world"...) have a high crime rate is the poverty that reigns them. And in a poor place, well obviously tourists are a good target for theft and kidnapping and all that. Of course some people are going to want to steal from you, you are a rich person and you have more than you could ever need and your family is rich too, so it doesn't matter if they take your things away (things that they deserve more than you). And if they abduct you and hold you for ransom, then your family and your government are going to empty their bank accounts into their pockets and they and theirs will be fine. Wait, that's not true, you say? You're not rich and neither is your family and yes, having your things stolen would be a problem for you? Doesn't matter. That's what somebody in need is going to think. Especially if you parade around the place in your very best clothes and shoes and with your most expensive jewelery/watch/whatever on, with your camera around your neck and your wallet sticking out of your handbag/bag pocket. So don't do that.

- Own that bitch, or at least look like you do. No matter what the situation, always look like you know exactly what you're doing and where you are and what's going on everywhere around you. Don't be obviously scared, ever. That's just asking for it. If you clutch your purse, that's like saying "Look, I have valuables in here, do you want them?". If you walk around looking lost and nervous, that's an open invitation to lead you into a dark alley somewhere. That's what I mean when I say you should always look like you own the place. Make your face shout confidence. If you do get lost, get yourself some gum or water in the next little shop or street stall and ask the vendor for directions.

Of course, I am not right. Everyone should take everything anyone says with a grain of salt. In my case, make that a spoonful. I am only one person, I might travel a lot, but what is "a lot" is so relative ... This is what I tell people when we talk about how much (or not) I travel: Compared to my granddad, I am a globetrotter. But compared to some of my traveler friends, I am my granddad. That's why I'm saying read what I say but don't believe me 100%. Not that I'm lying, but maybe I don't know what the truth is, you know what I mean?

So I say follow those three basic rules and you'll be fine. (Or maybe you won't, because who knows.) But, generally, - and again, remember that this is the opinion of one single person - my belief is that if you do stick to those three rules, the nothing bad will happen to you. And if something bad does happen, then it would have happened anywhere. We still have to consider statistics, the odd one out and everybody's best friend that bitch Murphy.

This is who I am and what I do. It has worked for so many years and this was the first time that anything like this has ever happened to me. Ever.

I will keep traveling, I will keep sticking to my three rules and I will keep on posting boring stories on this blog and the guilting everyone I know into reading them.

So let's get back ontheway and enjoy the trip!


PS: I just said you can't be afraid of traveling and new places and its people, right? So I'll give you something else to be scared of. 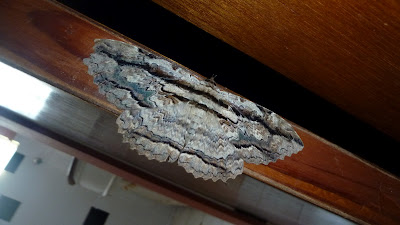 This thing is the size of the palm of my hand. Have fun with that. And sweet dreams, everyone!

Posted by isaontheway at 8:03 AM