See what I did there? See it? It's cheesy, right? Because I'm in Philadelphia, right? And that's also a brand of cream cheese, right? So it's cheesy literally and figuratively, right? Get it? It's funny, right?

OK, so anyways, I love Philadelphia. I know I only just got here, but I really enjoy this city. It was pretty late when I arrived the day before yesterday, but I still got an impressive first impression (Ah man, I'm really good at creative writing, too.). All the lit up skyscrapers made me feel so incredibly tiny! Remember that I'm from a city that doesn't have many highrises, so being surrounded by them all of a sudden is an intense experience for me. Of course, there's Boca Grande in Cartagena, which is one skyscraper after the next, but they're not lit up at night like the ones here and I also don't spend much time in Boca Grande in general, and especially not at night. And Miami didn't have the same effect on me, because the daylight does make a big difference in the way you perceive the buildings that surround you.

So here I am, in Philadelphia, the first "real" North American city I visit, - (Why the first? Because, as I wrote yesterday/the day before yesterday, Atlantic City doesn't feel like a real city. And Miami doesn't feel North American, it's too Latin and Caribbean.) - and it's full of art and culture and history. Three things I love!!

Of course, I couldn't start exploring right after I got here, because I'd been up since around 5/5.30AM and it was around 10PM already. Louizis just took me on a tiny little tour (around the block, basically) and to the Shake Shack, so he could have dinner and I could have a milkshake and after that we went back to his place and talked plans for the upcoming days.

Here's Louie at the shack: 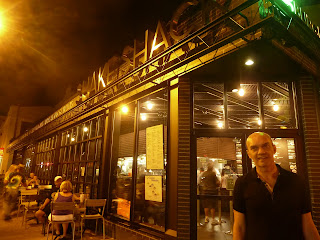 Yesterday morning, after a night of much-needed sleep on one of the most comfortable sofas I've ever slept on, I headed out to explore the city after Louie had gone to work. I walked, or rather, I strolled around the area before going to Starbucks around noon to go online and check e-mails, check Facebook and write yesterday's blog entry about my adventures in Atlantic City. I was going to go back online later and write about yesterday itself, but then I had such a good time exploring, I didn't want to take an internet break. And when I was finally done for the day I was pretty exhausted and decided to go home and watch Game of Thrones (a lasting addiction... I even bought the books now) until Louie came home from work.

Now, what did I do yesterday? Well, as I said the majority of my time I spent walking around and just looking at buildings and parks and signs and statues and commemorative plaques and people, lots of people. But I also went to the PMA - the Philadelphia Museum of Art. Louie had told me about it and since it had been quite a while since my last dose of art, I decided to go. The admission was a bit steep at 20 USD (for students, that's not even the regular fee), but after having seen a lot of it, I can honestly say that it was FREAKING WORTH IT!!! 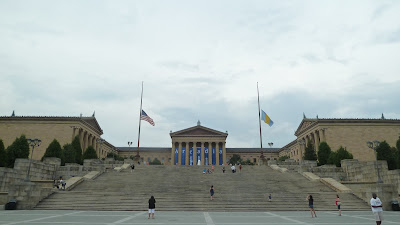 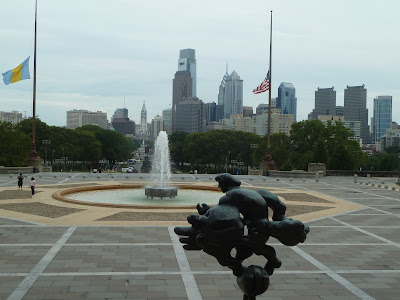 The city seen from the PMA. 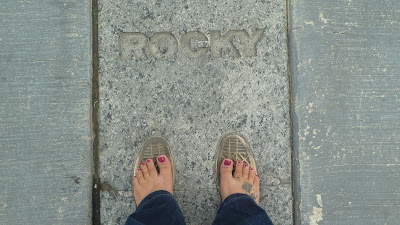 Stepping into Rocky's footsteps. Rocky I, that is... His statue has been moved down the stairs, it used to be right where you see him stand in the movie, but only his footprints are left there now. 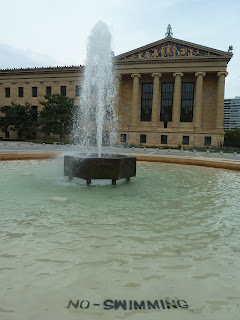 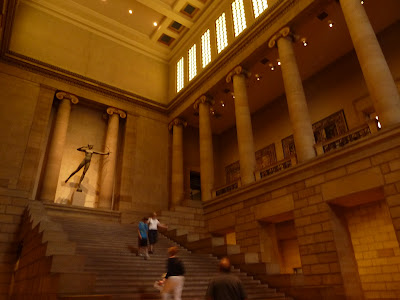 First, I walked into their current special exhibition: Visions of Arcadia. Oh my gods! The beauty, the wonder!! Cézanne, Matisse, Gauguin, Picasso!! There is no way I can describe to you what I saw in those galleries, because I would not be able to do the represented painters and their masterpieces any kind of justice through my words. All I can say is that I was more than just impressed. To come to this beautiful place and see some of my favourite painters united in an exhibition that honours some of their most beautiful and compelling works... wow. Just wow.

Taking pictures wasn't allowed in the Arcadia exhibition, otherwise I'd post some of my favourite pieces here. But just google these four paintings, which are the main pieces of the exhibition and my personal favourites, in order of appearance right here:

Paul Gauguin - Where do we come from? What are we? Where are we going?
Henri Rousseau - The Dream
Paul Cézanne - The Large Bathers
Henri Matisse - Bathers by y River

Again, I wish I could say more about this, but I don't even dare try.

After seeing Visions of Arcadia, I wandered around the permanent exhibitions and saw some of the highlights of American and European art. Miró, Picasso, Monet, Manet, Kandinski, Warhol, Lichtenstein, etc. etc. etc. Photography without flash was allowed in that part of the museum, but I still didn't take many pictures - I was too enthralled by the paintings and sculptures to take out my camera. What can I say, I'm a nerd for art...

I only took this picture, because it reminded me so much of my friend Jakob's beautiful and vibrant photos from his recent trip to New York City. This is Estate, by Robert Rauschenberg. 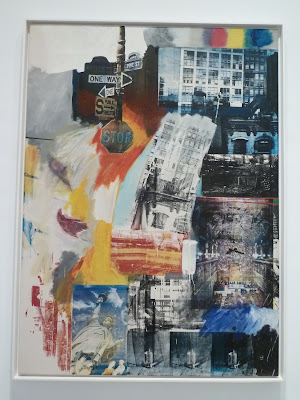 When the museum closed at 5PM, I headed back towards the city centre along Ben Franklin Parkway. I enjoyed that walk a lot, seeing all the flags between the trees that line the street and observing how the view of the City Hall and its surrounding highrises changes as you come ever closer. And of course, there are other important and impressive buildings along the road, that are also worth having their picture taken. 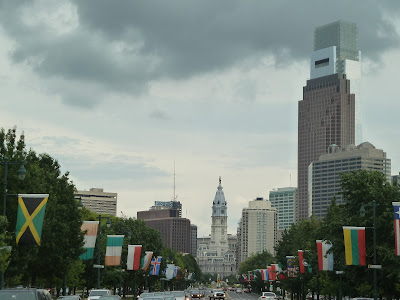 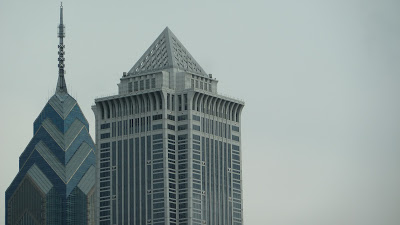 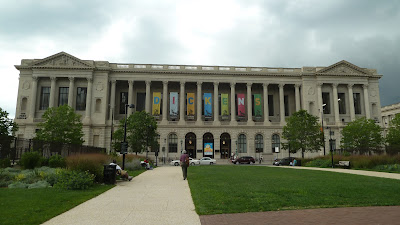 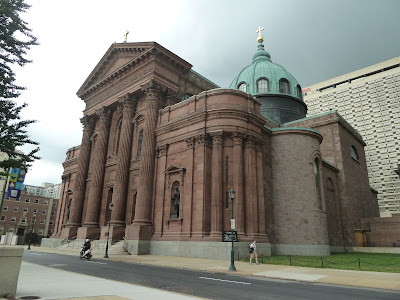 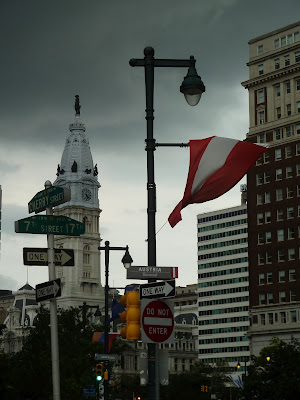 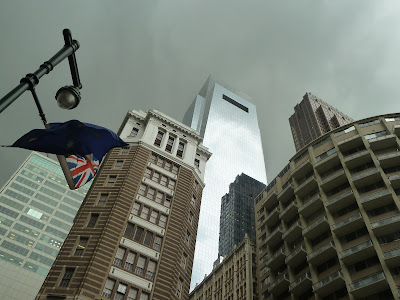 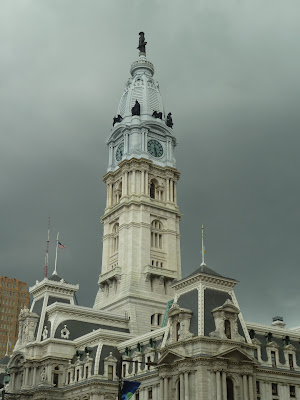 As you can see, a storm was brewing over the city. Lucky me didn't really get wet, though, because it didn't start raining until I was already just a block and a half from the apartment. I'd gotten pretty hungry by then and made a detour through a little food market, so I could make myself a Philadelphia-meets-Isabella style dinner when I got home. 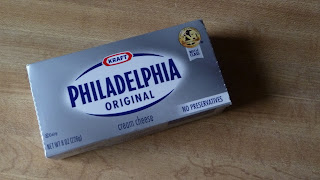 Obviously, I had to buy Philadelphia Cream Cheese, the Original. How else could I justify that horrible, horrible pun at the beginning of this blog entry, right? So I made myself some cream cheese bagels with tomato and strawberry - don't say "eeew" until you've tried it!! 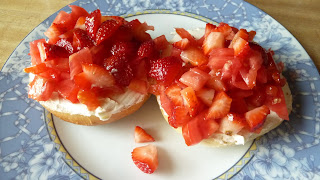 Now I could get started on writing about today right away, but let me tell you something: I don't want to! It's beautiful outside, the biggest heat seems to have passed now and also, I'm hungry. So I'm going back outside to walk some more, and then I'll find myself some food and eat it in the park. And then, after all that, I'll come back online and tell today's story.

I'll be honest, though, I'm already looking forward to it. Today's awesome.

Posted by isaontheway at 1:07 PM