I'm having the best time here! Port of Spain is treating me really well. And today was an especially cool day. The thing is that last year, apart from the curfew and the state of emergency, I also fell sick. I slept right under the A/C in the room and got a really high fever and a cold. So I couldn't participate in most of the programme of the excursion, but this time around I can. This morning, we headed out to Waterloo and saw temples and after that we dropped Christian off at UWI and headed out to Maracas Bay to go to the beach. Cordula, Susanne, me and Andy. Andy is the best driver, said by him and confirmed by us. 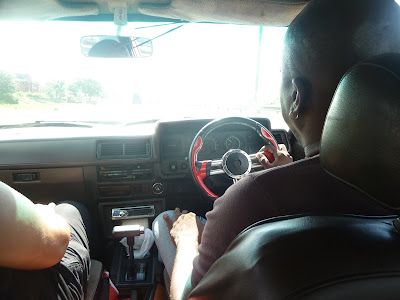 Can you see what's extra interesting about this picture of our car on the highway? 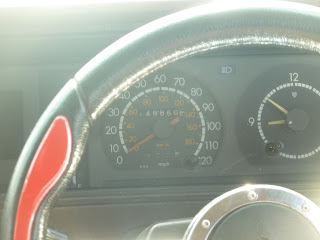 Close-up for the ones who couldn't see it.

On the way there, we already had a lot of fun, not only because our car was able to move even when it was going at 0 km/h, but because Andy's car also suffers from accute attention deficit and therefore puts a lot of effort into making us spend time paying special attention to it. It was not a problem though, because he could fix it without much trouble and the landscape here in Trinidad is amazingly beautiful. 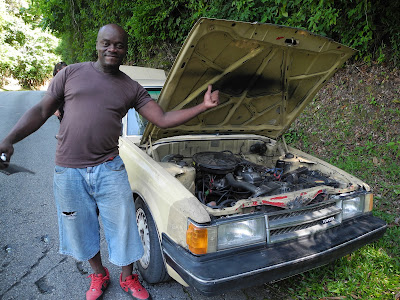 Andy and his car. 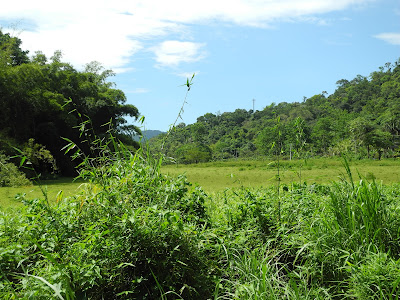 Snapshot out of the window along the way. 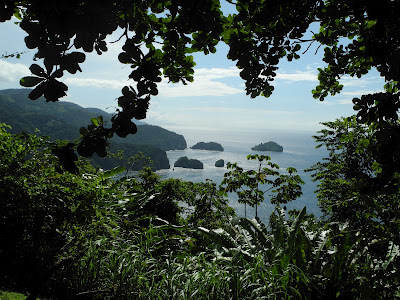 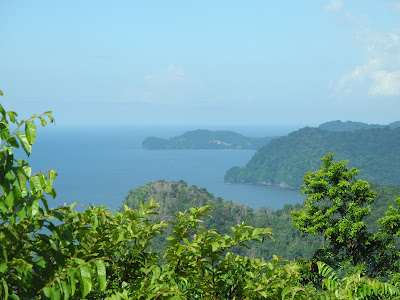 We stopped at a panoramic viewpoint along the road for this picture. So worth it!

Now to the sharkfood... omnomnom...

We got to the beach some 10 or 15 minutes after that short stop and the first and most important thing to do was get food. Why? I know, food isn't usually my top priority (Let's leave NYC and things on sticks out of this for a sec, why don't we...), but this is different. In Trinidad, you get shark. Shark! SHARK!!!

Bake and Shark - or Shake and Bark, as I call it now - is very popular in Trini and you can get it in many places, but one of the best places to get it is Maracas Bay. There are a number of food stands, little huts, really, across the street from the beach itself and they all sell Bake and Shark. Allegedly, the best one is Richard's, but I can't confirm that because I only tried it there and not at any other place. Last year, I had one by Queen's Park Savannah, not at the beach. I have to say, though, it was pretty good. Although... actually... that's a lie. It wasn't pretty good. It was freaking incredible!!! I love that stuff!

As you might be able to guess from my tone as I'm writing this, I was pretty excited, because I had been looking forward to my first Bake and Shark for a long time. That's because I remembered how good it was last year - it's the kind of food you don't just forget - and it's not something you can find anywhere else. So didn't want to waste stomach space on bread (duh) and got just shark. No bake for me, I just got plain Jaws. And I basically got twice the amount of shark for the same price, because the guy was in a good mood, YAY! So happy, because it was so good! 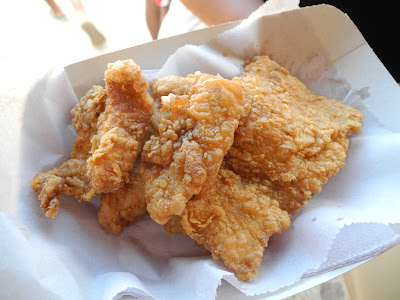 My gigantic portion of shark. That's four pieces and in a Bake and Shark, you just get two. Lucky me!! 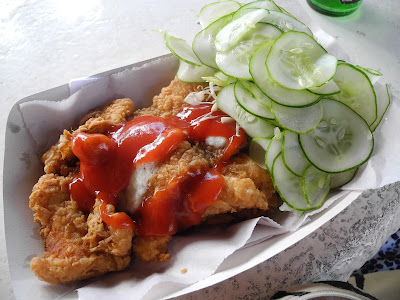 My shark with garlic, ketchup, coleslaw and a shovel-load of cucumber. Perfect! 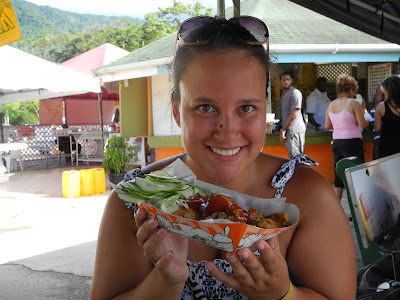 Oh my gods, the deliciousness of it! Undescribable! Is that a word? I don't care! It was undescribably good. After eating, we crossed the road and hit the sand. While the others changed into their swimsuits, I got us a beach chair so we'd have somewhere to leave our stuff. Andy got back first and immediately jumped in the water, then Cordula and Susanne came and Susanne and I followed the best driver in the world into the blue. Really blue this time, not red or yellow anymore. You know how you're not supposed to go into the water right after eating? Obviously, that doesn't apply when you eat shark, because when you eat shark you become the shark (Or at least, I did.) and that means you'll swim better.

Oh and swim we did. Susanne and I never even left the water until it was time to go back to Port of Spain. OK, I did leave it for 2min at one point to take some pictures of the beach, but that was it. Here's some of them: 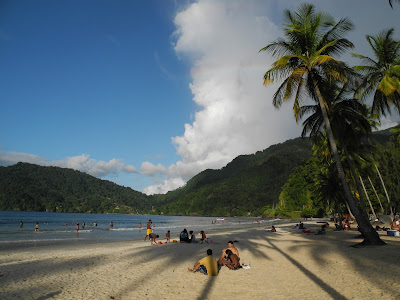 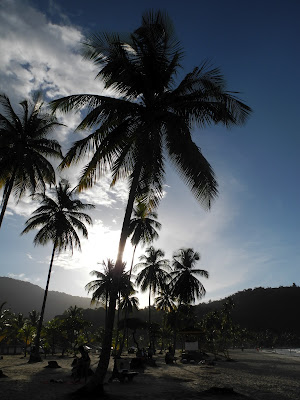 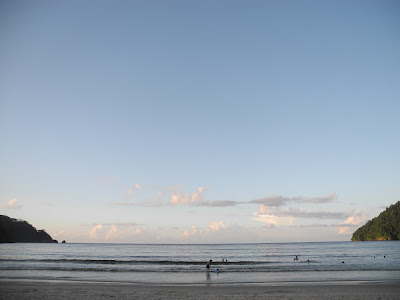 Maracas is on the north side of Trinidad, which is the Caribbean side. The water was warm with icy cold undercurrents, so you could stick your feet down towards the bottom and cool yourself down when you felt the sun was too hot. But swimming or floating it didn't get to you if you were far enough out, which we were most of the time, so it was allright. It looks pretty calm on that last picture, but there are actually very powerful waves at this beach. To get in and out of the water you usually have to jump or you get knocked over, which can be a lot of fun - especially to watch.

As I said before, I spent the whole time in the water apart from the two minutes for pictures. It was so wonderful, so soothing, even revitalizing. I love the sea so much, I can't even describe it. And Susanne does too, so we had a great time together, especially because we have a very similar sense of humour and thus had tons of fun. Also with Andy. At one point he went out so Cordula could swim too, but I guess she's not that much of a water person, because she left again pretty quickly.

And we didn't just float around or paddle in circles like many people do, today we got plenty of exercise in the water. We swam all the way out to the buoy, and back and forth in the bay and we jumped the waves and did sharkfights - I said it before, I was the shark, so obviously people were attacked and there were fights. Logical, right? Menacing, dark clouds appeared over the mountainous horizon at one point, but they didn't make it all the way into the bay so we had a rain-free day. We did see a rainbow though, a really big one. Well, what can I say? Just this: 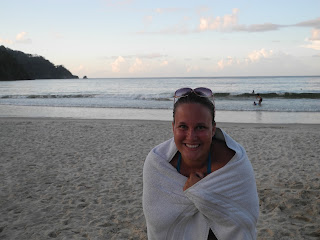 We even stayed longer than we were supposed to. Tomorrow is Independence Day, but the festivities in the centre already started to day and the original plan had been to stay at the beach until around 4.30PM and then go home, shower and change, and then head to Woodford Square to see what's up. But, because we love the water so much and so does Andy, we didn't get away from the beach until after six. Oops.

Again, though, it was worth it! Best day in quite a while!! And I even got a Shandy for the drive home, perfect end to a perfect day at the beach.

Posted by isaontheway at 9:12 PM