For weeks I've been talking about how much I'm looking forward to Trinidad and Tobago. Now I finally am in Port of Spain and I couldn't be happier. OK, maybe I could be happier, but withing realistic circumstances I am at the highest possible level of happiness right now.

Susanne and I are sharing a great room in the Caribbean Tourist Villa - the same hotel where most of our group already stayed last year and the room is cheaper for us than anticipated, because I had a little talk with the manager last night and he remembers me from last year and didn't even try to haggle, he just agreed to the price I proposed. The weather here is wonderful: it's beautiful and sunny most of the time. This morning it was extremely hot, but it just rained for about an hour and now it's cooled down again to a more comfortable temperature. I'm getting deeper into my research about general Caribbean topics, so that in a while, when I have a good overview, I can decide on a possible topic for my PhD thesis. And I finally got some Carib Shandy Sorrel - a sixpack just for me!

No, I'm not an alcoholic, that stuff is just freaking delicious!!

Yesterday morning, we all went out for a city tour through Port of Spain. All the places we visited yesterday, I've seen before, but still it was all new to me. That's because last year when we were here, there was a state of emergency in all of Trinidad. Half the public life seemed to have been shut down and there was even a curfew, nobody without a special permit could be in the street after 9PM. For that reason, 99% of places closed at 6PM to make sure all their employees would be able to make it home on time. Not the best circumstances for experiencing and really getting to know a new place. This year, it becomes even more obvious to me how bad the situation last August and September really was, because even in the day everything is more lively now than it was then. 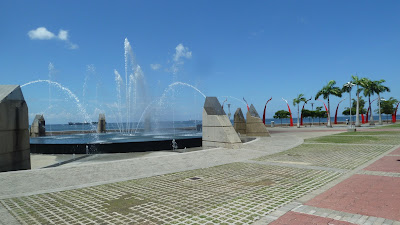 By the ferry terminal. Out behind the boats there's Venezuela. Hi, Venezuela! 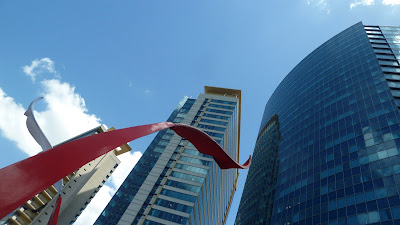 Before the ALCA fell through, this place was supposed to become the Brussels of the Caribbean.

Right here next to the ferry terminal there's a little food court of sorts, it's outside and not attached to any kind of mall, but there's still the typical food-court-like collection of little places to get breakfast, lunch, dinner and fresh juices. I had a watermelon juice and a sapodilla juice (not the same as zapote) and then we kept walking around the centre until we found a Rituals, where we had coffee. Yesterday really was a great day food-wise, because I had a lot of juice and some coffee and lemonade and I had water, but I only had one sandwich. I feel that I'm eating too much now that I'm with the group, because I eat when the others eat instead of when I'm really hungry. That's getting better now, though, because I had a good start yesterday and today I went shopping so I don't have to go to restaurants anymore if I don't want to.

OK, back to the city walk. We walked all around Independence and up to Woodford Square and then back down to the bus terminal which used to be a train station. From there, we took a bus out to St. Augustine to visit the UWI campus. That was awesome, because it meant books. We'd already gone into a bookshop in Henry Street, but then we also went to the UWI bookshop on campus and after that we visited the International Relations department's library and the main Alma Jordan Library. There, we spent a few hours so I had plenty of time to look up good literature for my different fields of interest and browse through some of the volumes. 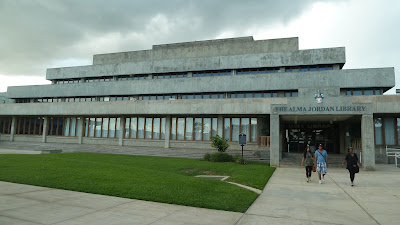 It was great, really, and the further along I go on this trip and the more time I spend around universities and libraries the more I want to go back university myself. I just have to keep studying, I can't help it. During the last two or three weeks, after sliding into travel-mode and before coming to Trini, I was almost not sure anymore that I really wanted to keep going with my academic formation. You know there's beaches and everything's relaxed and my job allows me to keep going like that forever, at least in theory. But now... now... 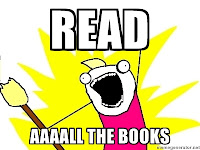 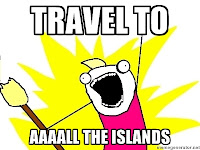 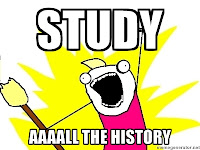 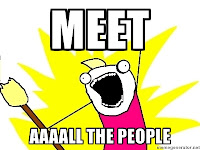 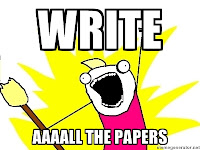 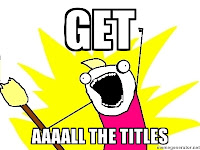 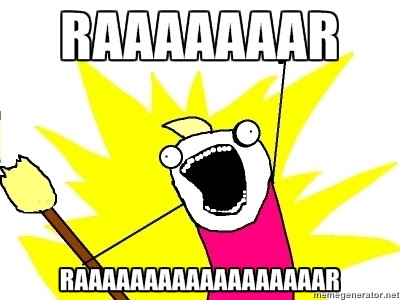 Seriously, this is me right now.

Paola, I hope you're having fun with this page, sweetie. Laugh about AAAALL the pictures!

I shouldn't talk too much about my university-related plans, because I'm already way more excited than is good for me and my heart. But positively excited, in the best way possible.

So, yeah, I mentioned bookshops, right? And, well, you konw what I'm like, right? So, basically, we all know what I'm about to say... right? OK, I'll just say it. I bought two.

I had to! They wanted me to buy them! They would have been sad forever if I hadn't bought them and I would have been even sadder! I couldn't have let that happen! It's not my fault! Just look at what I bought and give me a chance, OK? They're not useless or stupid books. They're good for me! I can use them! For my future! They're basically necessary for my academic and professional advancement! I depend on those books!! 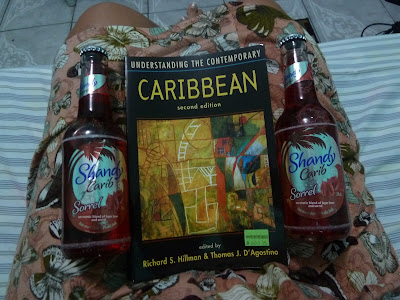 This is what I have to look forward to this evening. I'm pretty stoked.

Today was supposed to be a beach day, but I've had weeks of beaches before I joined the group and I'll have months of beaches once I'm back to traveling by myself. So instead of joining the others, I joined Christian and Verena to go back to the bookshop in the centre. There, I got my two new babies. Then, I went to the bank to get some more cash, because I took too little at the airport. And then - here comes the part the mean people will like - I walked around in circles for over 20min because I couldn't find TTPost!! And I really had to find it to send my postcards, because there are already stamps on the 21 cards I'm going to send. And I had to lick them all! So there's no way I'm not sending them, I suffered too much already.

From there, after finally finding the office and posting my cards and wiping off the gallons of sweat, I took a St. James car to French Street to do some shopping at Hi Lo. Yes, I got Carib Shandy Sorrel! Finally! A six pack!! Wohooo!!! But that's not the only reason I went to the supermarket before coming back to the hotel. I also got tons of juice and some milk and cereal and bread and cheese. For alimentary independence.

Oh and talking about independence: Trinidad and Tobago is celebrating their 50th anniversary of Independence this year, and we'll be here for the big day on August 31st! 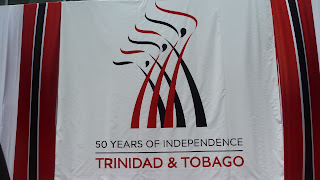 I like it here. I'm having a good time.

Posted by isaontheway at 5:03 PM