I'm in a very, very lazy mood at the moment and all I do is sleep and read and lie on the beach - and not even that much, because it's a whole block away, that's just sooo far to walk... I'm joking of course! Or am I?

But anyways, because I'm so lazy it's just a bit difficult to concentrate for long enough to produce a whole blog entry about all the things I've seen in New York. What can I do? Well, I can write about what I ate in New York, you know, all the "typical" food I mentioned. This should be fairly easy, because even though I had some breakfast this morning (I swam in the ocean for a bit after waking up, so I got hungry and ate something) I'm kind of starting to feel a little bit of hunger again. And don't we all know that when you're hungry thinking about all the things you want to eat and all the things you've eaten in the near past is a simple task, because the images force their way into your head by themselves anyways!

I told you I took an early train into New York Penn Station, well, relatively early. Early for someone who's on a holiday, OK? Nobody can expect me to get up at 5AM right now. Nobody! That connection took me to NYP around 10.30AM and I walked right to the corner of 34TH Street and 6TH Avenue, where Macy's is, to meet my friend Mari "by the tables in the street". Weird directions, but they make perfect sense once you get there, because there are tables in the street in front of Macy's. Who would have thought?

Mari, being a real and true New Yorker, knew where to get the real NYC breakfast. All over the city, there are little carts where you can get coffee or tea and a variety of bagels or pastries. They have a special name, too, but I can't seem to remember it right now. I'll ask Mari and update this post, if I don't forget that too. 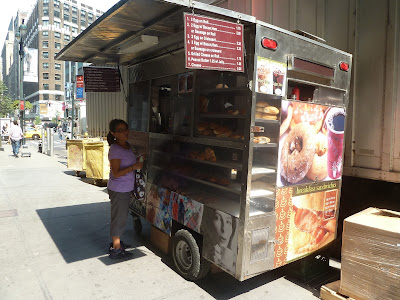 Mari getting us coffee and a cream cheese bagel. 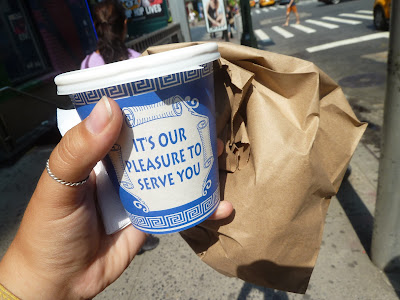 I had a coffee with milk, no sugar, and a cream cheese raisin bagel. Mari had her coffee with half'n'half and helped me with my bagel, which was way too big for me. So we were set for a few hours and started our trip around the city.

For lunch, Mari took me to the beautiful Boathouse in Central Park. It wasn't the one where Mr Popper and his penguins went in the movie, which I had originally thought we were going to, but it was wonderful! What a beautiful place, looking out over The Lake in Central Park. And the prices were very encouraging, too. I'd have expected a place like that, in a location like that, with a high-class name like that to be way more expensive. But the restaurant is basically divided in two, just to make sure everybody can enjoy it. There's the posh half, where you sit right on the terrace by the lake called The Lake (Who's in charge of the names of places in Central Park? You, Sir or Madam, are not doing the best job...) and there's cloth napkins and real silverware and all that and you get fancy meals at fancy prices. And then there's the ordinary-people-can-afford-this half where you're not right on the terrace, but you get to sit in front of windows overlooking the lake called The Lake (I can't get over how boring and uncreative that name is...) and you can get burgers, hotdogs and all sorts of desserts from a self-service bar and then enjoy your food with the view of the posh people and the water. This is what Mari and I did and it was delicious! 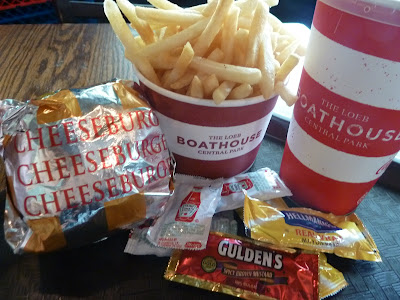 We shared a hamburger and fries, because we knew we'd have to keep eating to experience it all. 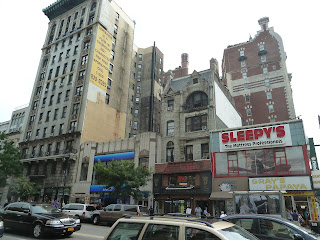 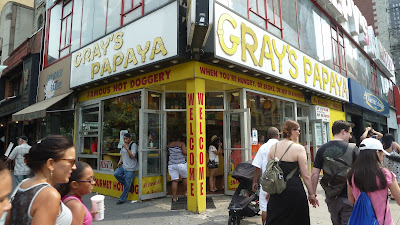 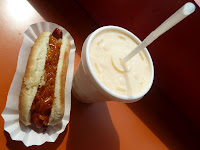 My dog and my papaya drink. 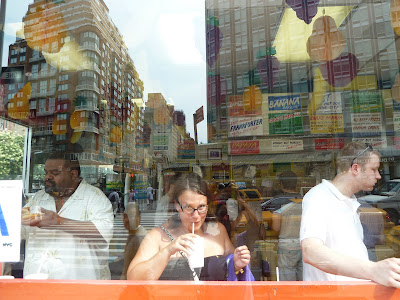 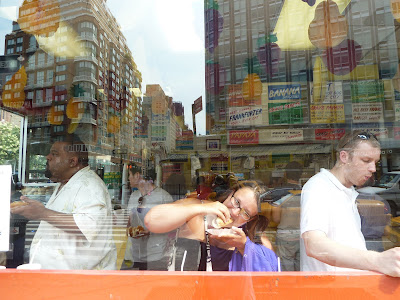 Mari had the cool idea to take the pictures of me from outside and how sweet of her to actually do that, she's a great friend - and not just because of that!! Thank you, Mari.

No more food after that, we had more than enough with everything you see in these pictures. Oh, I almost forgot the nectarines we had at the Met! Sorry, I wasn't trying to withhold information from you... here's the total: half a bagel, half a burger, half a portion of fries and a Gray's Papaya hotdog - no halves there, it would be a sin to refuse the whole thing, that's how good they are!

These guys think so too: 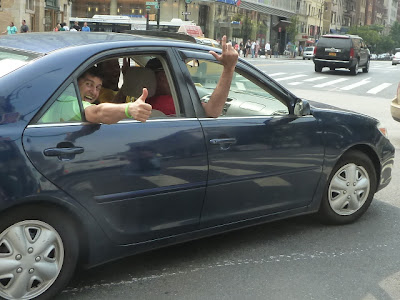 I'm going to get lunch now, this post has made me hungry.

Posted by isaontheway at 3:09 PM