After a night of good-but-could-have-been-better sleep (a very eager housekeeper wanted to clean our room at 6AM…) Tonii and I got up around 9AM and started the day thinking about what we wanted to do. For me it was very clear: I had to get food on a stick! I was still sad about not having gotten that waffle on a stick, and there was a place in Key West, where they did Key Lime Pie dipped in dark chocolate, frozen and on a stick. Clearly, I had to get that. Tonii still had to do the most important thing one can possibly do on a trip to Key West (No, not the pie on a stick, because not everybody thinks like me. I really don’t know why, though.), which is to get a picture at the big buoy that marks the southernmost point in the continental United States. And no, I don’t know how a string of islands can count as continental, but whatever, I’m not the one to decide something like that, that’s up to them. And we both wanted to have more lobster before we left, so we planned our day around those three things.

First, though, we both really wanted to have another shower, because the bathroom at our room at the base was so wonderful. And I found out that the coffeemaker in our room came with coffee for us to use – and it was Colombian! 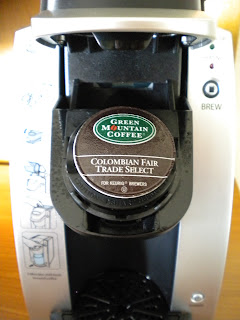 So, coffee and shower and packing and ready we were to go get into the car and over to Duval Street.

Stop number one was the 90-miles-to-Cuba marker, where we had to stand in line to get our picture taken, but it wasn’t too bad as it was raining a little bit and many people seemed to have decided it wasn’t worth the wait in the wet. And the ones who did still want the photo took it really quickly to get somewhere dry fast. 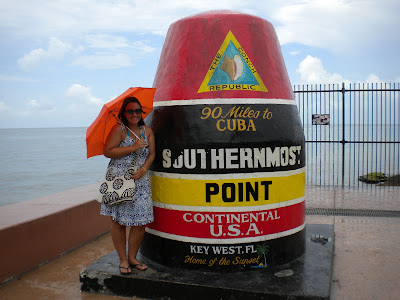 Look, it's me in the picture. Again, you have proof that I was really there!

From there we went to the Western end of Duval Street and looked around the shops in that area, as the day before we’d concentrated on the Eastern half of the road. And I actually bought something. I know I shouldn’t be buying stuff, because I already have a full backpack (Though there’s less in there now than when I started out – things break!), but I just had to had to had to. I bought two dresses. They were only five dollars each and I just had to get them, because they’re really pretty and I don’t have any pretty dresses anymore. The two I did have I sent to Colombia and who knows if they’ll ever get there? So I got a little black dress and another one, not quite so little, in different shades of pink and blue and some white, grey and black. And I like them so shut up, you can’t tell me what I can or can’t buy!

OK, during the time we were walking around we came by a place called Kilwin’s, where they have all sorts of chocolate and candy and, guess what, they put it all on a stick. Tonii got a caramel apple and I got a Pecan Turtle Rod: “a crisp pretzel coated in caramel and pecan pieces, then drizzled in silky chocolate”. Sounds good, right? It tasted great, too. So I got my first food on a stick and the stick was edible, that way, I even saved the planet a little bit!
We walked around some more after that and then had to make our way back to the car that was parked across the street from the Cinema Tropical, where a statue of Marilyn Monroe attracts more attention than the actual movies played inside.

On the way there we stopped at The Lazy Gecko to get a lobster roll for Tonii and for me, lobster ceviche. Oh my freaking gods, it was so delicious! Words cannot describe it and this picture doesn’t do it justice, but you know I don’t lie so you will believe me. We missed the beginning of the Key West Lobster Fest by a mere six hours, but lots of places already had specials on offer, so we still got to enjoy it – oh and enjoy it we did! 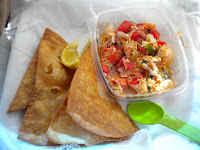 My delicious lobster ceviche!!! I don't know what the bread-like stuff is, I tried it, but I didn't eat it all, it was fatty. 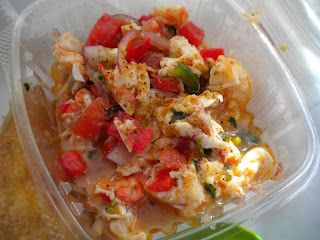 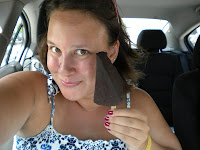 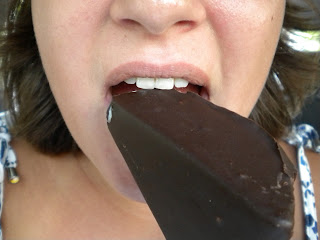 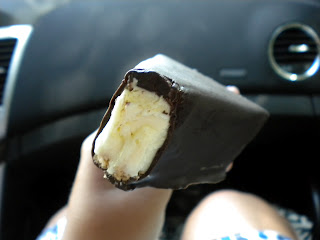 See, it really is a piece of pie dipped in chocolate and frozen, not some kind of pie-flavoured ice cream. You can even see the pie crust at the bottom there. So good!

Only later did I realize that my trip really hadn’t been one hundred per cent complete yet, even though I’d thought so. When did I realize? When we decided that I was going to do the drive back up to Hollywood and I got to cruise along the U.S. 1. Over bridges, over different sized Keys, through South Miami and back onto the I95 that I already knew so well. And I drove over the 7 Mile Bridge! The one from the movies and the postcards! Then, and only then, my trip was really complete.

Sunshine, lobster and a long drive. Thank you, Key West.

And thank you, Tonii, for having the idea and taking me with you.

Posted by isaontheway at 9:22 PM