Yesterday was definitely better than the day before yesterday, because we took the hotel owner’s boat out onto the Essequibo River. Then we switched onto the Mazaruni River, which is a part of the first one. You just “pass the white buoy” and are in a different river. 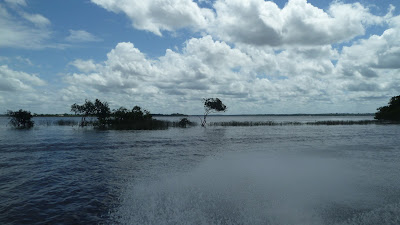 Our oh-captain-my-captain was a licensed tour guide for this area, so he explained things about what he showed us. About the river(s), about the quarries we passed on the shores, about the little islands in the river Essequibo (there are 365 in the Essequibo alone, they all have names but most of them are uninhabited).

First, he took us to see the Mazaruni prison, on the far side of the river. It was already there in colonial times and has been active as a prison all this time, Cheddi Jagan was there as a political prisoner for a while. We didn’t go ashore, but that was no problem, because we all really wanted to get to the beach already, which was our scheduled next stop. 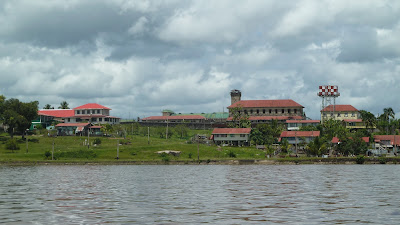 The Mazaruni prison, old and new.

A few minutes down the river from the fort, there was a little island and that one wasn’t pure mangrove; the north shore was sandy. Unfortunately, it was privately owned so we had to pay for using the beach, but it was fine because it wasn’t much and it was definitely worth it. Just don’t ask me what the island was called, I have not even a trace of a clue. We all hopped off the boat into the golden sand and most of us didn’t even take a look around the place before basically ripping off our clothes and running into the water like madmen. It was deliciously cool and so calm, because the current of the river didn’t get close to the beach. And these rivers are so wide, you have a lot of space to swim around in worry-free! There were funny little mini-currents in the river too, where you’d swim and one metre was cold, the next warm and then cold again. 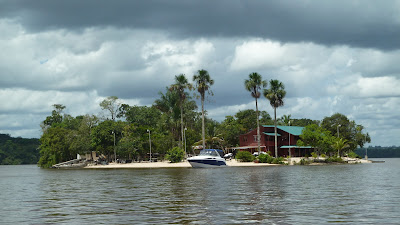 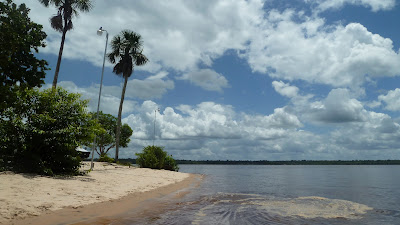 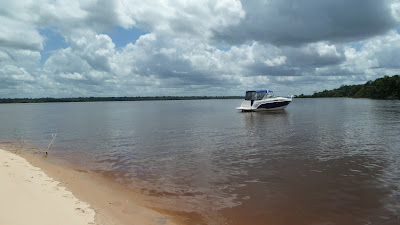 The OCMC explained that the water gets its colour because of the iron in it and the redness of the ground; like Redi Doti, Bartica means red earth. It was a little muddy in the river, because there’s constantly boats going up and down that liquid highway, but it was still beautiful to swim in and so refreshing. After a while we had to force ourselves back out of the water and onto the boat to keep going and see more, because the beach wasn’t the only planned real stop for us and, luckily, also not the only one that involved swimming.

Our first stop after the beach was the old Dutch fort Kyk Over Al, but we couldn’t get off the boat, because the little stairway up onto the island had just been tarred and the rest was mangroves, no way you can walk through that. So we just saw the only thing left from the fort: the old stone doorway. We took our pictures from the boat and kept going, which was what everybody (except for Christian) had really wanted to do anyway, because the next destination was a waterfall and we all (or most of us, because one girl is scared of water – don’t ask me why she’s on this trip…) really wanted to jump back into the cool blue red. 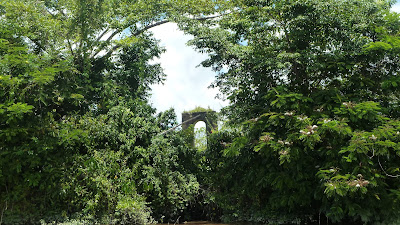 The doorway that's left of Kyk Over Al.

We didn’t go straight there, though, the OCMC took us through some rapids first. Not to worry, they were shallow and not dangerous at all. Still, the boat jumped around and the soundscape immediately changed from motor, birds and wind in the trees to motor, shrieks and crazy laughter. After some rock-hopping, we turned back (another round of rapids) and finally went to where the falls were. The OCMC moored the boat to some trees and covered it up in case we were surprised by rain and from there we started the 15-20min walk through the jungle into the depths of the Guyanese fauna to where the waterfall was waiting for us. Again, I have not the slightest idea what it’s called. 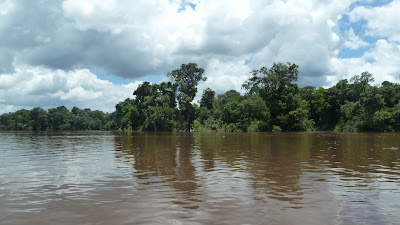 The walk was nice, because it was comparatively cool between the trees and we saw many interesting plants. OK, this sounds boring. And it was. The real reason I loved the walk was that I got to hold on to the OCMC’s machete. MACHETE IS BACK!!! 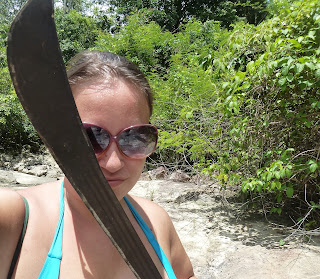 He’d brought it in case there were fallen trees or other obstacles in the way, but in the end there was nothing and I got to walk through the jungle feeling like Rambo and chopping branches off trees. That thing was sharp! Like, really sharp! I touched it to a branch at one point and I didn’t put any force behind it, but it still left a dent. One branch I cut off (Sorry, I know it’s not nice but I just really, really had to…) was pretty thin, usually a branch like that would yield before the blade and move with it instead of withstanding and being cut off. But this machete severed it straight and it didn’t even really move, it just fell. Crazy!! Needless to say, I loved that part of the day.

This isn’t to say that the waterfall itself wasn’t great, because it was. We even had a little adventure, because to get under the fall we had to climb over the rocks under the surface of the water and get to where the current wouldn’t pull us down and away from where we were supposed to stay, where it was safe. We had a lot of fun there – again, that’s everyone apart from the girl who’s afraid of water… Pictures were taken, but I don’t yet have all of them, because there were so many different cameras involved, I don’t even know who has them right now. 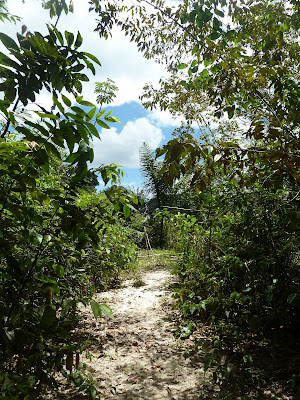 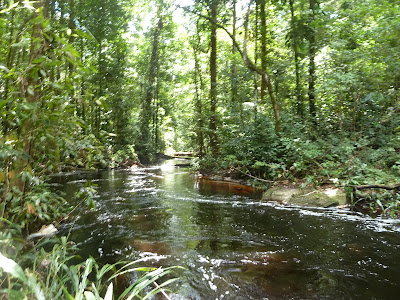 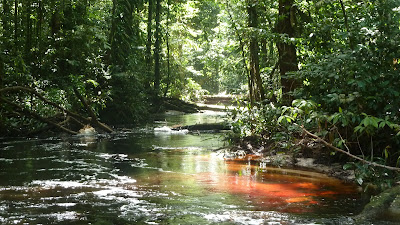 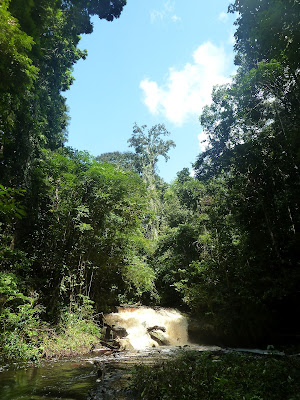 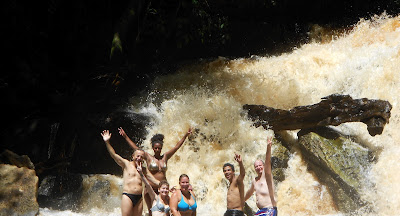 The falling water made for a great back massage, even though it stole my hairband and opened Giuliana’s bikini top. And it also tried to take everyone’s pants off, but, luckily for us, it didn’t succeed there. Especially lucky for me, because smart thing that I am, I forgot to bring a bikini bottom (Whooooooo live in a pineapple under the sea…) and I wouldn’t have been able to change into my underwear if I lost my clothes, because that’s what I was already wearing. Yes, I was walking around the beach and the island in my underpants. So what? They were colourful and could have been a bikini. Shut up!

After trekking back from the falls to the boat, we were going to go to the beach again, but the OCMC decided that no, we weren’t going there because he didn’t want to pay again. Aww… BUT! We had passed a gold boat (not a boat made of gold, a boat that takes the people to where the gold is and that they use to vacuum the riverbed and get the gold out of the sand from down there) on the way to the falls and on the way back we stopped and asked if we could come aboard and have a look around. And they said yes! 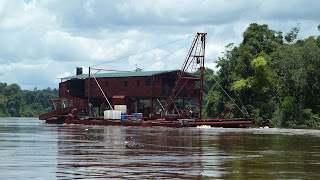 Gold boat, not working at the moment.

Gold boats are interesting both in a technical sense – if that’s what you care about and that’s what you understand – and also in a social sense. The owner – a person, not a company – was a Brazilian guy and most of the people working on the boat were, too. At the moment we visited, they were moored in a little bay, because they had to do some repairs on the boat. There were more Guyanese people on it then, because they’d come down from G/town to help with the repairworks. But after ten days, that’s how long they’d calculated the repairs to take, these people would go back home via Bartica and the rest, only a handful of people and only one of them Guyanese, would take the boat another 2-3 days further inwards, or south, and then stay there for months searching for gold. We were told by one of the welders from G/town that their record findings amounted to around three pounds of gold per 24hrs. 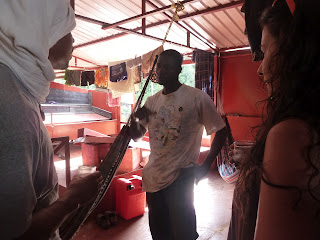 We even got refreshments from the gold guys, or rather, from the one woman on that boat; they gave us cold coke, passion fruit juice and peanuts. They were visibly glad about our visit, because for once they got to talk to someone who wasn’t in the gold trade, but a group of mainly young people from different places who were sincerely interested in what their lives were like and wanted to hear their stories. A welcome change from the roaring of engines that they usually hear 24/7 on that boat.

After that we just went back to Bartica and I would like to talk about our evening there, but I will do that later as Susanne is getting ready for breakfast and I want to go get some bread and cheese now.

PS: I write this today in the morning and am posting it now because there was no internet in Bartica. More about yesterday and today later. Or something.

Posted by isaontheway at 7:19 PM