I wish they were gold...


We're going to Bartica tomorrow, a gold-digger's town in the interior of Guyana, on the Essequibo River. When I say it's a gold-digger's (pork-knockers, they're called here) town, then I don't mean it in the historical sense. No, there's a lot of gold mining going on in Guyana and Bartica, as far as I know, is a place where a lot of people do find their fortune, because it's the meeting point between the coastal region and the gold-filled interior. Or their company's our country's fortune. The kind of place where people pay in gold and diamonds. Seriously. Well, it's what I heard, at least. I'll find out more tomorrow.

This trip will be short, after two days we'll be back in Georgetown and so we can leave the majority of our things here in the hotel storage room and only take what's necessary. Unpacking, packing, unpacking and packing is therefore the plan for tonight. Yay.

Whilst unpacking and re-packing my bag, the small one, not the big beast, I stumbled across my little money pouch. I have a little bag full of coins from this trip and trips from last year that I kept because they were left over and unspendable and I might need them again. But they're way too many and now I know that lots of those places will probably not see me again within the next year or two, so I sorted through the coins and gave most of them to Susanne. Not to weigh her down, but because she has a friend who collects exotic coins. I did keep a few, like for example the USD (because I'll be back in the States for a night in a few weeks) and the XCD (got them in Grenada and will be able to use them in St. Lucia), but most of them are now tumbling around Susanne's bag instead of mine. 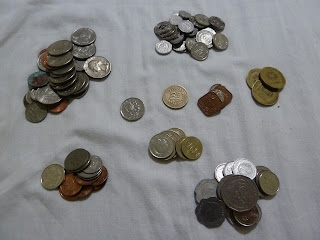 These are all the coins from my little pouch, sorted by currency. 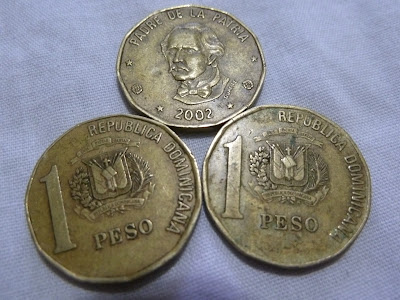 DOP: All that's left from my three days in Santo Domingo: tres pesos. 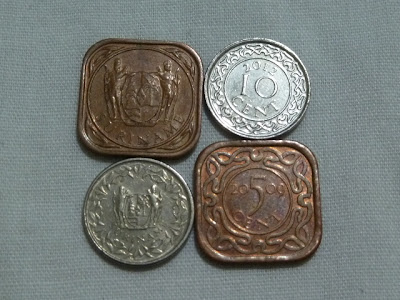 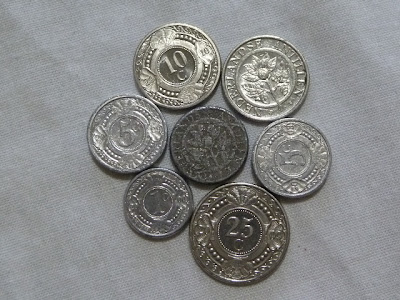 ANG: These are a few Netherlands Antillean Guilders that I got in Curazao last year and used again in Sint Maarten this year, when they didn't ask for US Dollars. Not sure I'll make it back to Curazao, although I really want to go in October to meet Paola. 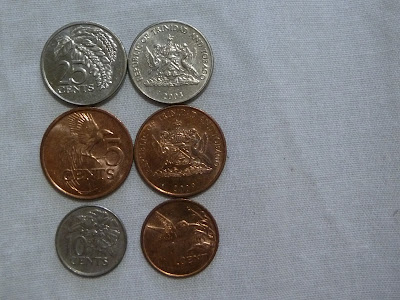 TTD: For me, personally, the Trinidad and Tobago Dollar has the absolutely most beautiful coin motives of all the currencies I've used so far. Flowers, humming birds, it's 100% Caribbean! And I'm really happy I have to keep them because I'm looking forward to going back to Port of Spain in LESS THAN A WEEK!!! YAY!!! 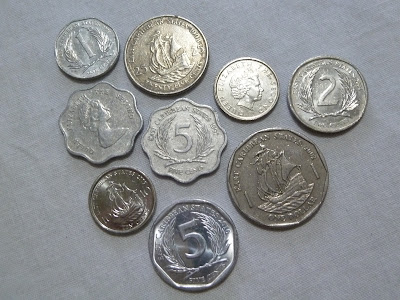 XCD: They are the reason that the SRD only has the second-prettiest five cent coins. Seriously, aren't those gorgeous? Perfect for earrings... I still have these coins from my trip to Grenada last year and I'll be able to use them again when I'm in St. Lucia next month.

Having all these coins with me makes sense, because they're all Caribbean and I either just got them or I might be able to use them again really soon. But I also found a surprise in that pile of metal... that just shows that I don't lie when I tell you that my brain shut down when I graduated and now it only completes the most basic funcions and tasks that guarantee safe (more or less...) existence, but nothing that has any remote connection with true intelligence: 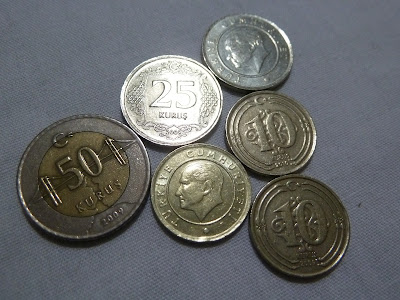 TRY: Tell me, why exactly did I bring Turkish Lira?

I also have USD and EUR with me, a little bit of each. USD, because I just came here from the States, and Sint Maarten also uses the US Dollar on the Dutch side, along with the ANG. And I have EUR because I took a little bit of money to the airport when I left Austria, in case I needed something in Frankfurt and then I ended up not having time for buying anything - remember that story? That's not a lot of money, though, just a few notes and coins in dollars and the euros are only a little over five. I should change them to something I can use, because I don't plan on going back to Europe for a while, but I know that in a few months it'll be nice to have that five euro note with me and be able to look at it and go all sentimental. Also, you wouldn't believe how difficult it is to handle all sorts of different currencies, already today I had to turn all coins over to figure out which they were - including the euros!


My favourite coin in my collection is one that I don't have as a left-over from a trip and I also didn't bring it because I'll be able to use it any time soon. I won't ever be able to use it, actually. I brought it with me, because it's a piece of home and when I have some time I'll stick it into my memory-book. Yes, I have a memory-book. I'm a little girl, I know.


This is a Schilling. 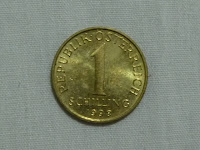 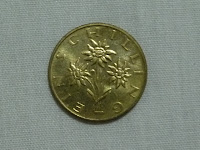 Now I've prepared everything I needed to prepare for packing in the morning and leaving to Bartica for two days and two nights. All that's left for me to do now is to wish really hard for all my coins to turn into gold overnight, because then I'd actually be rich. Right now, all those coins together are worth less than five dollars. USD, that is.

Or, if they don't turn into gold, maybe I'll find some in Bartica!