I'm seriously getting back on that party-horse, even though everything's small scale at the moment, but it's definitely happening. I'm suffering all the more for it, because I'm not used to drinking and dancing, especially the drinking is hard at the moment. But I will keep going, I will keep trying and I will prevail!!

Had my first beer in ages the night before last in Bartica. OK, of course I didn't have just the beer. As in, I made myself a cola con pola: beer mixed with a lemonade or soda. In my case, it was a Carib with Guaraná Antártica... mmmgood! We're going to Trini tonight so soon I'll be able to have my beloved Carib Shandy Sorrel, then I won't have to mix anymore, because it's already prepared. Sorry, beer-lovers. I don't like beer, I can't stand the taste, so if I want to drink it (and I sometimes do, don`t ask me why) then I have to alterate it to make sure it doesn't come right back up.

So the day before yesterday, after relaxing for a while and applying like a bottle of aprés-sun lotion each, we marched down the main street to the Brazilian place we'd scoped out the evening before: Victoria. It's really cool that there's so many Brazilians in Bartica, because I finally got to practice my Portuguese there! Agora sim falo novamente, ainda é só um pouco, mas um pouco é muito melhor que nada! OK, back to English. At Victoria, all the tables are outside, partly under and partly next to the sun-roof (rain-roof, really). So we sat down and ordered hamburgers, which are really good there. They use real meat and real bread and if you order extras, they're really there. So unlike certain fast-food chains, which they don't even have in Guyana - another plus point for the country.

Before the food came, we watched as big, black clouds came slowly creeping towards us and all of a sudden there it was: thunderstorm! The wind blew, the rain fell sideways and it got so cold, I had to go inside, because outside it was freezing. Only I also felt the same cold inside, because all the doors were wide open. Anticlimactic... But, then the incredible happened. The Brazilians, the girls who work at the place and the young fellow who helps them out with some things, they made Susanne and Giuliana stand back from the table too and they, wait for it, brought it inside for us! The brought in our table and three chairs, the tablecloth and the decorations and condiments. Then they dried everything and then they made us sit down in the middle of the place. Our food arrived about the same time as the table, so we got sit in a round of people who then proceeded to openly watch us eat. And it was their good right too, of course, if we sit there like fish in a tank eating our dinner while everybody else who has had to flee from the rain is standing... well... I'll leave it at that. Still, it was very nice of them to take such care of us.

When the rain stopped, everybody moved back outside. Some guy had started talking to me before we got our food and he and his girlfriend/wife/whatever invited us to share their table, because no others were free. It was a little weird, because they all were asking strange questions and we didn't really want to answer them, but it was fun anyways. Six people at one table speaking four different languages, all at once!

After, we had a lecture at our guesthouse and after that I got to talk academic future possibilities with Christian, who's kind of sort of something like my advisor, so I'm pretty happy with the overall outcome of the day.

Yesterday we went back to Georgetown and I got into trouble. Well, not real trouble, but a little bit of trouble-like circumstance. See, my back had been hurting for a day and with the long boat ride and then the bus ride, that got worse. So when we got to the hotel, I took two painkillers à 500mg of acetaminophen. Dolex, from Colombia, because they're the ones that work best. Others with the same active ingredient would do the trick too, but those are he ones I had and they have the extra plus of making me fall asleep, like really quickly. Not sure why, all others don't do that. Point is, I took two but I didn't go to sleep. I could have slept, within less than 20min I was half gone, but I kept myself awake. Why? Because I had internet, finally! Yes, welcome to my world.

So I spent my time surfing and flying (and spinning and well, basically high), but I did have the sense of not joining the evening programme of going to the Intercultural Festival of the Three Guyanas. We had some food at the hotel and then it was time to celebrate Seppi's last night with the group, because he's going straight to Tobago and then to Austria after we get to Port of Spain this evening. Every time we had to collectively pay something and got change, I kept that leftover money and collected it on the side for an event like this. So because we were to have a farewell party for Seppi, I went to the gas station with that money - 5,000 Guyana Dollars - and blew it all on booze and snacks. Just doing what I was told, I was following direct orders from the big boss, so don't judge me here. 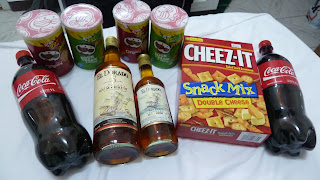 While shopping was necessary, drinking wasn't. I accept that. I just felt that what with us sitting together as a group, it would have been somewhat antisocial not to accept a cup of rum and coke.

So there I was, already half high with painkillers and then drowning them in rum. Well, there had been somthing like three or four hours between the pills and the drink, but I think that not sleeping wasn't a smart move. I was fine last night, no problem at all, but this morning I did not wake up happy. Churning stomach and I guess the alcohol must have prolonged the effect of the acetaminophen, because for the longest time I still couldn't feel my body. I'm back to normal now - sadly, that means that the back pain has returned too - and everything is fine. But I hope I'll have learned from this.

We still have the small bottle of rum and we're taking it to Trinidad, because tonight is Giuliana's last night - especially sad for Susanne and me, we're going to miss her.

So, now everybody is slowly getting out of bed (we've been up for hours, but with the laptops) and getting packed and ready to go to Trinidad. I'm really looking forward to that, as I think I've said before. Trinidad, here we come! And to you Guyana, a thank you. You were fun! 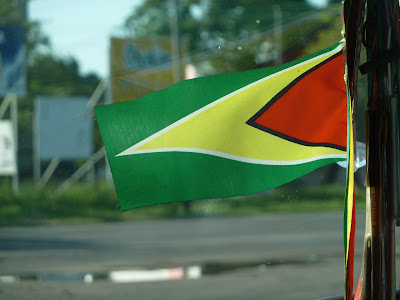