Bartica. The golden village. Not.

We left the city, Georgetown („city“), in the morning and of course everything took forever – we’re still a group, after all. First stop, the cash machine, because everyone had to get more money. I haven’t yet seen a single ATM in Bartica, so it was smart to make the stop at Scotia Bank. Second stop, Caribbean Airlines, because some of our flights had to be re-confirmed. This one I don’t understand because I’ve never in my life re-confirmed a flight and I’ve never been taken off one. What is the point? Only the gods know. Or in our case, Christian. Whatever. Third stop, Parika – the actual destination of that first bus ride.

In Parika we had a little break from traveling, because we had to wait for our boat to get ready for the trip. You can go to Bartica by plane, but that’s expensive. And you can travel by car, too, but that takes hours and hours and hours and the roads are bad, because Guyana only has that one main road along the coast (pretty much like French Guyana and Suriname) and a few not-so-well-constructed ones that go into the interior. Bartica isn’t even that far from the coast, more or less the same distance from the Atlantic as the airport in Georgetown, but it’s in the middle of the jungle.

It had already started raining on the way to Parika and once we’d gotten there it started to really pour. And then it stopped. And then it poured again. And it stopped and it poured and so on and so forth. After a while, our boat was ready and we got to board with all our stuff wrapped in big black trash bags, because we had to be prepared for rain and splashing water on the boat, even though it was roofed. In the end, we were fine, because it stopped raining during our journey and the captain was a smooth driver – much smoother than me on that ferry!

It took us an hour to get to Bartica, compared to the six hours it takes the car-ferry to get there that’s really quick. I wish I could have taken pictures while we were out on the Essequibo river, but my camera was inside its case, inside the bag, inside a trash bag. It was absolutely beautiful. The river is extremely wide, so it looks almost like you’re navigating on a big lake, or on the sea when it’s calm and you’re close to the shore. And the river banks were all mangroves so it reminded me a lot of home – the Colombia home, mind you.

We got there and had to find a place to stay, because rooms had been reserved in the Platinum Inn, but that wasn’t a nice place and also they didn’t have triple rooms, which was a problem especially for Giuliana, Susanne and me. So we started walking around town in the downpour to find a different place and Christian decided to take us to the place he usually stayed at, I don’t remember the name exactly, something with “relax”. Getting there, the guy who ran the place explained that he had actually received a reservation from us, but that he’d given our rooms away, because we hadn’t called again from Georgetown to confirm that we were really coming, something Christian had promised but failed to do. But he was really kind and made some calls to other places he knew were nice and not only did he find us a place that had vacancies, he even took us there in his car so we wouldn’t have to walk all the way back to the other end of the main street in the rain. That was fun, because there were seven of us, eight with him, and he only had that one car. But he fit all of us in and I ended up sitting between him and Giuliana, in the front – on top of the cupholder! I guess, I’m a cup now.

Also, because I was sitting next to him, Junior, I got to talk to him and he told me he was born and raised in Bartica and that it’s not just the gateway between coast and interior, it’s actually a very lively place full of people who live here their whole lives (according to him, I haven’t seen the liveliness yet…) and there are schools and everything. Of course you’ll need locals in a place like this to provide the infrastructure necessary for all the people who keep coming through, but he actually sounded like he was rather fond of the place, which was nice.

The place he took us to we’d seen from the boat, it’s a few minutes down the road from the Platinum Inn, where Christian and Verena are staying, and all of us found rooms we’re happy with. And it has a view of the Essequibo… oh wow… look at these pictures! I took these from the terrace: 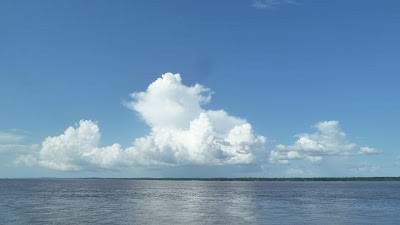 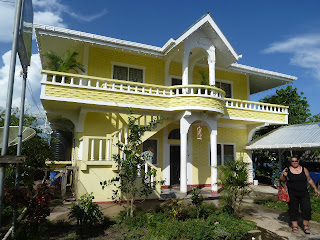 After we’d had some time to organize ourselves and get our stuff into the rooms, we met up again with the prof at the harbour (ferry dock is what I’d call it) and then we did the official city tour, where we walked up and down the main street for the third time, because we’d already used the free time to get some food, too. The third time! This place is small, so I guess you can imagine how quickly and easily you can get bored, especially if you keep walking up and down the same road. 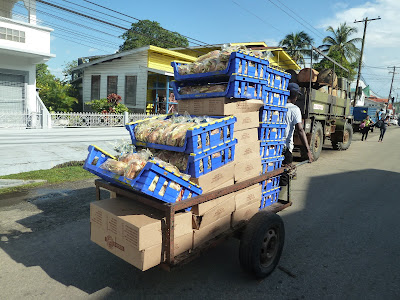 Bartica people seem to like bread, we saw three carts like this one on the first day. 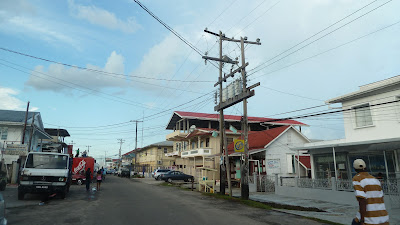 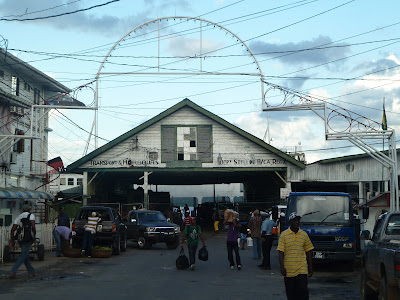 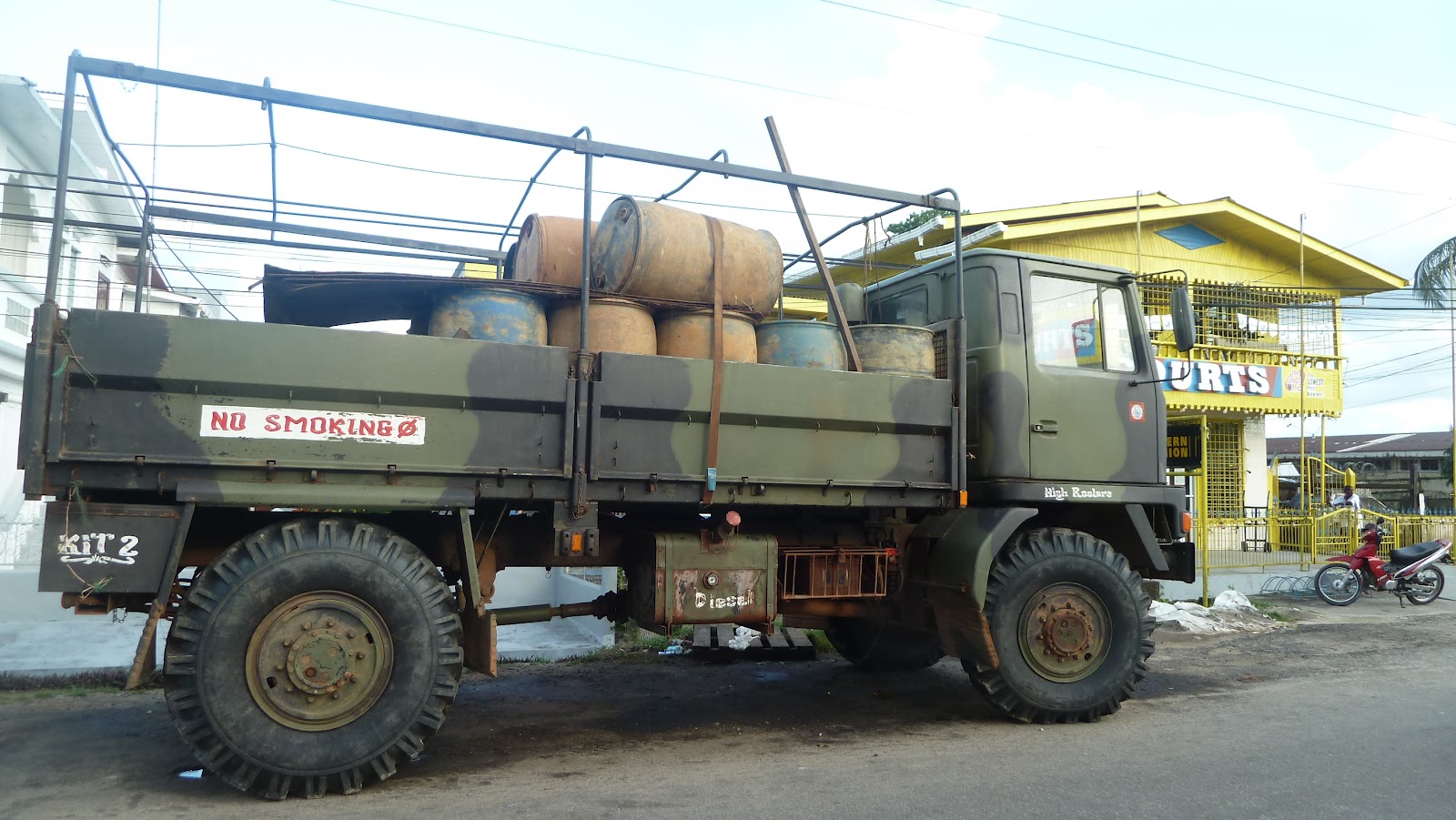 Venezuelan gasoline. Smuggled, of course. At least part of it.

Starting that tour we already got the first impression of what a town like this is really all about – twice we were …umm… not harassed, but almost, by intoxicated men in the street. This is the whole group still, not just us girls walking around by ourselves. We went to a gold trading place to see what the current prices were and what the locally dug-up gold looked like, but it was far less interesting than what you’d imagine. And I guess that what you’d imagine already isn’t that interesting, so substract 90% of the interest from that and there you go. What can I say, there’s really not much to do in Bartica and we’re all just wondering why we had to come down here for two nights, when Christian could have told us about the town and the gold and everything in Georgetown. Because even though we went to visit a gold trader, nobody wanted to buy anything... pointless trip, really. 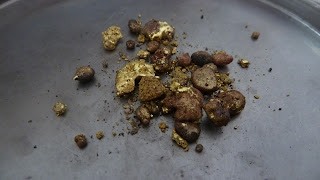 We’re going to see waterfalls and river beaches tomorrow, so that’s going to be a lot of fun if the weather stays civilized. But if we’d left earlier this morning, we could have gone to see that today and then gone back to Georgetown tomorrow. Then we’d have the cool boat rides, the waterfalls, the beaches, a little bit of the miners’ life in the gold-digger-town and still not get bored by spending too much time in this too tiny town. And we’d be spared the almost-harassment, too. These gold diggers are weird people. Very, very weird… Here's two pictures that show you why: 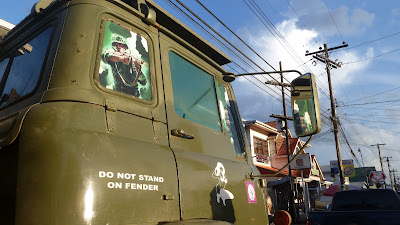 Gold truck. The decorations show the general sentiment in this town. To be fair, though, not all trucks look like this. But you won't be wrong to assume that this is a Wild West town located in the jungle, bursting with testosterone and where life for women is not a lot of fun. 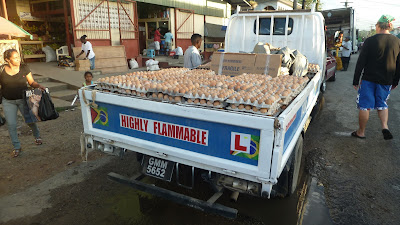 Well, there’s the group traveling again. I hope the waterfalls are everything we’ve been promised, so they’ll make up for the rest!

PS: I wrote this post the day before yesterday and I'm posting it today, because we didn't have internet in Bartica. Sorry for the delay.

Posted by isaontheway at 6:35 PM