I'm at SXM right now, Princess Juliana International Airport. Already checked in for my flight to PBM via POS and waiting for boarding with my laptop and a can of Arizone iced tea. How I love this stuff!

Guess what else I love... Sint Maarten!!! And Saint Martin, too. The French side was so much fun and before coming here I hadn't even known that I'd be able to just cross over like that. This is a two-in-one island, like Hispaniola, but smaller. And I learned so much here, so much! I don't know if you can tell, but I'm really excited. I still can't believe what a great time I had here, I really can't.

Where did I stop last time? Ah, right, "later, we're going dancing". And we did, oh, how we did... I'm not going to tell you all about that night, because what happens in Vegas SXM, stays in Vegas SXM. But let me assure you, it was fun. I danced so much, I could hardly walk on the way home! Really! I danced!!! I even wore one of the dresses I'd bought with Tonii in Key West, the little black one. I don't remember the last time I had a party night like that and I almost completed 24 hours of being awake, I just missed that mark by half an hour. It was legen - wait for it - dary!!! For real, though, this is so much more than just a HIMYM reference!

The next day we went to Pic Paradise on the French side, where Wendy, Nonet and Charlotte did ziplining and Wendy's friend Jean and I stayed by the café/bar of the place chatting. That was when I first really realized how extremely green the island is. There are plants everywhere! It's like somebody took a big fluffy blanked woven of leaves and just spread it out over the hills. The only places where there are no trees and bushes and vines and ferns are the roads, paved or dirt, and the houses that are built into the greenery. And the beaches of course, they are heavenly white and the water is brilliantly blue and crystal clear in most of the bays we visited.

After the ziplining/chilling, Jean and Charlotte and I went to a beach in Simpson Bay (I think) with two of Jean's friends. It was cloudy and rained a little bit, but the water was absolutely perfect nevertheless and I enjoyed it very much. After that, everybody went home to shower and freshen up and then Jean picked the two of us up again and we went to visit another friend of hers that she wanted me to meet. He had cooked dinner for us, because Jean basically told him to and I think he was a little overstrained with the sudden presence of three girls, two of them strangers to him. But after we all ate and he relaxed a little, he opened up and we actually had a really cool conversation. Like Jean, he's originally Haitian and he told me all about Haiti and what it's like compared to Saint Martin and all about the other places he knows, because he used to be a professional basketball player and has been all over the world, almost. Having been to Jamaica, he also told me a lot about Kingston and now I'm really, really looking forward to that part of my trip too. Also, because I've found a CS host for the days I'll be there. This is getting better and better, wow. That night we didn't go to bed as late as the night before, because I was still tired and Charlotte had to work early the next morning. For me, the next day was a very quiet one as I spent it doing laundry - by hand! Still great, though, relaxing is good and important too.

I didn't take many pictures the first three days. No, wait, actually that's a lie. I didn't take any pictures the first two days. I only charged my camera's battery the day before yesterday. Sorry for that, it's not something I usually do. Remember how I was shocked to find that I'd only taken a little under 300 pictures in New York? Well no I have two days in Sint Maarten with no pictures at all! It's all good, though, don't worry. I will never forget the beautiful things I saw and you can always google them.

Still, I did start taking a few pictures when I finally charged the battery, and this one here is from the bus ride from Cole Bay over to Philipsburg, so you can see what I'm talking about when I say green blanket flecked with houses. Do excuse the quality of the photo, please, I took it out of the window of the moving bus. 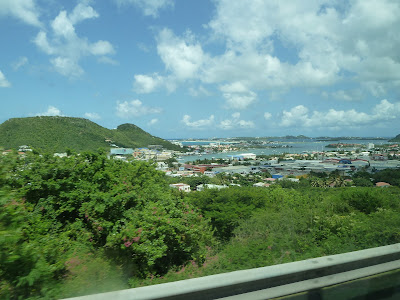 This second picture here I took that same day, when Charlotte and I were driving from Cole Bay to the Sunset Bar to see the sunset and the last planes coming into SXM from other island destinations. It's an equally bad picture, but still, you get a sense of what I'm talking about. 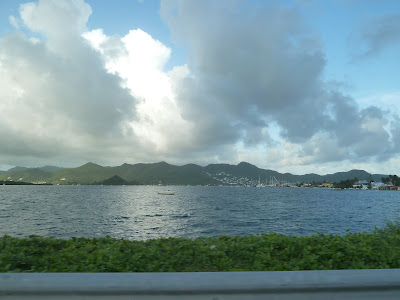 I think the best word to describe it all is: lush.

My day in Philipsburg was fabulous, I really didn't do much at all, but it was nice to walk around the little town, look at souvenirs (though I didn't buy anything aside from postcards, as always) and enjoy the beach on the Boardwalk. There was a cruiseship that day, so everthing was open. But the town was nowhere near as crowded as I'd expected it to be, in fact, it wasn't crowded at all.

French side and Dutch side license plate.

Panoramic view of the beach in Philipsburg. 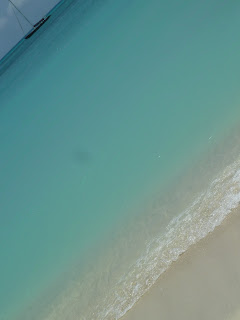 You can hate me now.

After coming back from Philipsburg, burnt and blind (I hadn't brought any sunscreen or my sunglasses, that's how smart I am.), Charlotte and I went to see the sunset. Here, you can see it too: 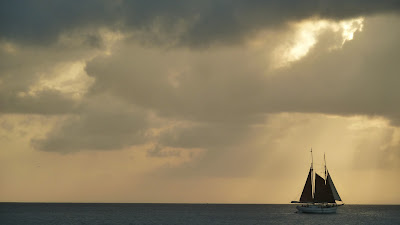 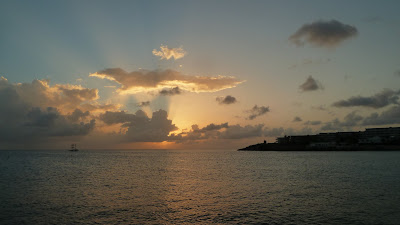 And now guess where we watched the sunset and the arriving and departing planes. Right! At that world-famous beach that we always see on YouTube!! I also got a video, but I can't upload it right now, when I've got it on my channel, I'll post the link. 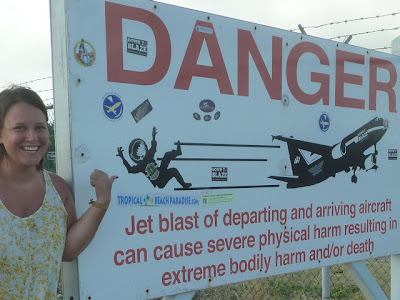 Now last night, after coming back from seeing the sunset and having a little dinner (I'd cooked the night before and we converted the leftover fresh ingredients into a pasta salad.), Charlotte and I got ready again and then we picked up Wendy to go to La Bamba. Unfortunately, Nonet couldn't come with us that time, because she'd already left for Curacao that morning.

La Bamba is the same place where we had dinner the first night I arrived. Every Tuesday night they host a Latin Night, with all sorts of latin music - salsa, merengue, bachata, reguetón and more - and people come from all over the island to enjoy the music, the happy hour and the dancing. And again, I danced too! Bachata! And merengue!! And salsa!!! This time I was wearing the other dress, even though I hadn't been sure if I really liked it on me, but Charlotte and Wendy had said it looked good and I also got a lot of positive feedback on it at the beachbar, so that was good. And the best thing about it? It flies!!! It's the perfect dress for going dancing and I am now in love with it.

We met Chris and his friend again, who had been at the place where we'd gone dancing on Saturday. And other friends of the girls' were there too. And the DJ was on fire, it was basically song after song after song that made me go "OMG I love this song!" or "Do you hear this? This is awesome!" and other such exclamations. I was just so hyper, full of energy and life. I love it.

Now it's all over, but I'm still so inmensely happy. I had so much fun, it's unbelievable. And my self-esteem is sky-rocketing after last night and Saturday and Sunday and all of it! No words for it. All I can say is:


PS: If this blog post seems somewhat confused or incoherent, that's because my brain is racing, my hands are shaking and I don't know what to do with myself because of all this extreme energy flowing inside me. Bursting with flavour, Pringles? Really? I'm freaking bursting with happiness!!!

Posted by isaontheway at 5:17 PM