Today wasn't exactly a special day, just another day on the excursion, really. We got up in the morning, got ready, the minibus-taxi-thing came to pick us up and together with Eric, a professor from the Anton de Kom Universiteit here in Paramaribo, we went to Santigron, a Saramacca maroon village. Only six of us went today and of those six, one person went in Eric’s car so he wouldn’t have to drive all alone, because even though there was enough space he didn’t want to join us on the taxibus. In hindsight, that was a pretty smart move and lucky for us, but that’s not where we are in the story yet. Also, the original plan had been to visit two villages during the whole day, but because the day before had been so long, Christian shortened it to visiting just one village and coming back to Paramaribo sometime between 2PM and 3PM.

On the way there we stopped to get coffee and then at another place to get water and then at yet another place to get food. I was going to get something, but in the end I didn't due to gross misunderstandings with the food vendor that really pissed me off, pardon my language. I asked for a dish with some vegetables, some chicken and some noodles. She gave me a dish of vegetables, a dish of noodles and a plastic bag full of chicken. So I told her to keep the noodles and just give me the vegetables and the chicken, because she really didn't want to understand when I tried to explain to her several more times that I just wanted one dish with a bit of the three. What she did then was to tell me to give her 19 SRD for that, just the vegetables and one piece of chicken. What the hell?! A full dish of vegetables, rice or noodles and meat, complete with sauces, will usually cost between 10 and 15 SRD. So I told her to keep it, because that’s the kind of treatment I find inacceptable. Sorry if I sound like a jerk, but that’s what it’s like. I can go for a long time without food, though, so it was no problem. Also, I had some really good food at lunch (salad and shrimp) and I even had some dinner (because after the cold lunch my stomach asked for something hot), so it was actually good I didn’t get that food in the morning.

We got to Santigron then and first visited a self-proclaimed medicine man – self-proclaimed, because nobody confirmed it for us and we couldn’t be sure. He didn’t tell us much, because he told it all to Eric in Sranan and Eric was a bit shy in the beginning and didn’t do any translating to English, so we missed out on the medicine man’s stories. But after that first part he warmed up a bit and translated everything that was talked about. Because we were foreigners to the community, we had to go talk to a captain. There is a head captain in the village and six (sub) captains and we got to talk to the captain that’s not only the youngest, at 48 years, but also the only female captain in the village. That was really great, because she told us a lot about the kind of work she does for her community, how captains are elected and the relationship between the Saramacca and the other Surinamese people, among other things. She also talked a bit about the local religion, Winti, and about the role and position of women in her community. 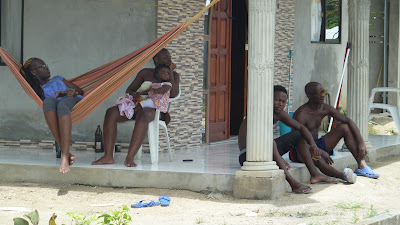 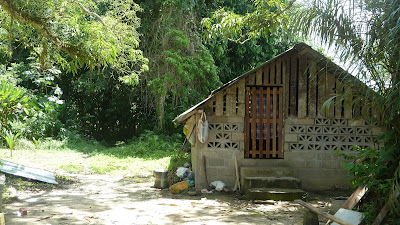 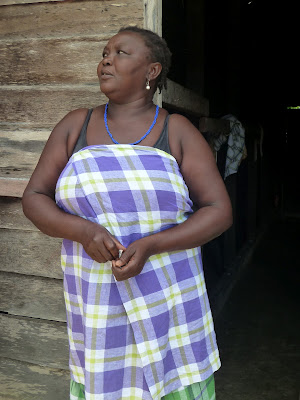 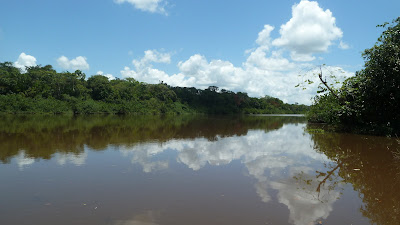 After she dismissed us – you only get a limited time with the captain and a limited time in the village, apparently, - we went down to the rivershore and then back up into the village to sit next to the little central shop and chat to some other people. After about 1,5hrs to 2hrs in the village the time came to leave and as it was already past 1PM anyways, we decided to go get lunch.
That’s where the trouble started, an example for why I prefer traveling by myself.

I don’t feel like relating the whole let’s-call-it-incident, because there’s really no point, so I’ll just tell you that one person had wanted to spend more time in the village so while we got lunch, she went back there with the taxi driver. Then there were several calls in order to get the guy to come take us back into the city, which he didn’t do – some say the girl wanted to stay even longer in the village, some say he never even told her we had called, some say everybody’s stupid and I want to go home. This is exaggerated, of course, but that’s what it all sounds like after a while. So Eric took some of us back to the hotel, while Christian and his partner stayed behind to wait a little longer for them to pick them up and take them home. In the end, they ended up taking a bus, because it took the others too long to show up. So that’s all really complicated, right? But it kind of worked out in the end, more or less, right? At least, everybody made it back to the hotel.

But no, that’s where the trouble only really started. The driver had to be paid. It was 300 SRD for the whole day. Divided by five, because five of us made use of the car. For the calculation, though, it was divided by six, as originally planned. So now there’s this discussion going on about who owes whom money and why and how much and whose fault was it that the trip didn’t work out the way it had been planned and blahdiblahdiblah… Honestly, I kind of understand everybody’s point of view and nobody’s at the same time. So I’m just trying to stay on the sidelines and not get between the fronts and not joining in when everybody's talking about everybody behind everybody's back, because I really don’t feel like becoming part of the problem. I am going to wait until they find a solution and then go with it, because I do have my own opinion, but right now I couldn’t care less. Don’t get me wrong, I have my principles and my ideals and I’m not usually the just-go-with-it kind of person but will defend what I think is right. But this is a group trip and the issue is too small to get on anyone’s bad side for. Only, it’s also too big to ignore, so now the mood’s all weird and things have to get sorted out in the morning. Cabin fever, already?! Then again, everybody else has already been traveling for a few weeks so I guess it's normal. It's just weird for me, because I just joined and this kind of thing doesn't usually happen until later in the trip. But it's OK, it'll all be alright tomorrow.

Oh man… still... I really do prefer traveling by myself and to all the people who always ask me why, there you have your reason. I bet you understand now!

I feel I have to lighten the mood now, so ...umm... Groups also have their good things, of course! One of them is that sometimes there's someone in your group who has Colombian coffee candies and then they give you one and they make your day good... I love Colombian coffee candies!! That little thing actually made me really happy today. Really, really happy. I'm so easy to please sometimes, it's great. 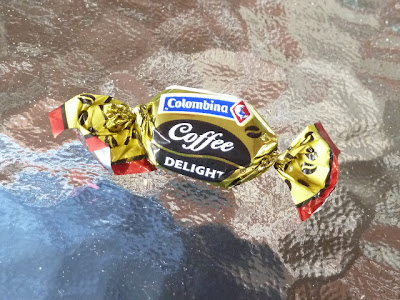 Thank you, Susanne, you rock.

I’m still having fun and I’m still going to participate in other excursions if I get the chance – they do take you places you oftentimes wouldn’t be able to go just by yourself –, but let me just tell you it’s a really good way of training your patience and your diplomacy skills.

Tomorrow off to a new place in Suriname, I’m sorry I forgot where exactly we’re going, then the day after we’re going to Guyana – more new interestingness!!!