OK, now I do have stories about Guyana. Oh boy, and they are juicy. Literally! The other B!TCH-post is nothing against this...

Yesterday was a very long day, excursion-wise. First, we left the hotel in the morning to do a kind of city tour, where we first took taxis to the National Library of Guyana (not impressive, not impressive at all) and then from there we walked around what's supposed to be the centre of Georgetown. But the thing with Georgetown is that it's really not that city-like. Or, how do I put this..., it's not like the kind of city we'd know from other places. It seems even smaller than Philipsburg (and that place is freaking tiny), simply because of the architecture and style. The buildings aren't high, they're not close to each other and the infrastructure is provincial. As in, there's not much of it. There's one impressive thing though, which is St. George's Cathedral. I'm not a church person, something everyone who knows me in person can vouch for, but it is the biggest wooden cathedral in the world, so that's pretty cool. 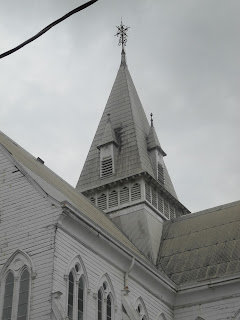 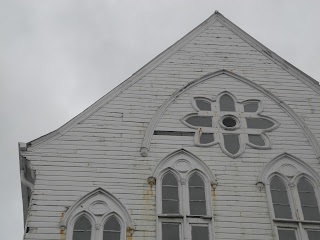 After passing the church we walked around the town for quite a while; Christian was taking us to a place he knew where we could get good lunch and then to the Botanical Garden, we enjoyed seeing a bit of Georgetown and its people. I didn't take many pictures, because my camera was almost discharged - again, but this time I re-charged the battery right away. And there was another reason: I like looking and taking it all in, so for most of the time I didn't even think about taking any pictures, because I was so busy watching everything around me.

At one point, though, I did take a picture - with Giuliana's camera -, because I was looking up at some guys who were working on a housefront-construcion and they signalled me to take a picture of them. I like when that happens, I have a picture like that from New York City, too. You know, most of the time people don't want to appear in strangers' pictures - I know I don't! But then sometimes you get a picture like that, where someone in the street sees you taking photographs of something else and then they want to pose so you can take them back to your country. And they often get all excited about you taking their photograph, too. And when they're not up on some scaffolding, you get to talk to them too and hear their story. As I said, I like that. 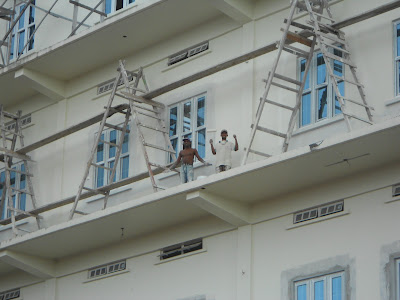 Big smiles and thumbs-up to you too, guys!!

We did get to the Botanical Garden after another while of walking, but we ended up going to the zoo instead, which is basically part of it. Christian and Verena recommended it and the admission was inexpensive, so we all went while they went to the National Archive to prepare documents for today.

What we didn't know was how small the zoo was going to be. And I don't mean the whole thing, the zoo grounds, I mean the cages the animals were in. Oh, they were beautiful little creatures, but so sad... 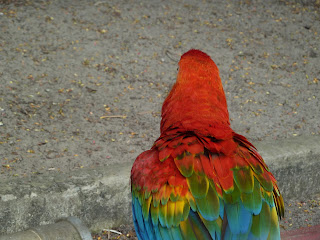 This pretty little birdie didn't want to turn around for us. 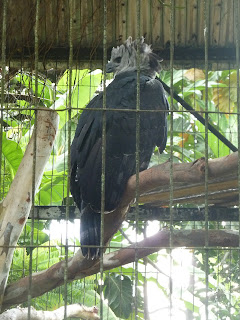 This is an eagle harpy. She did turn around, but look at the accusation in her eyes... 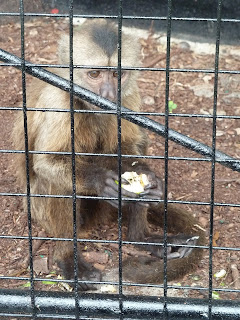 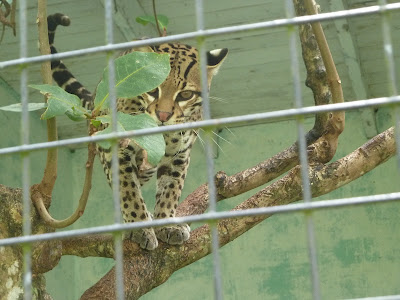 And this last little guy is the one that peed on me.

Yes, you finally get the story you came here for.

I know I put that in the title, but I don't really think he's a b!tch for doing it, I actually understand him. First, there's the problem with all the animals' cages being too small for them to be able to be comfortable. But then you mustn't forget the visitors that annoy them! There were many people standing in front of this little (Little? More like ridiculously tiny!) cage and he was getting a little nervous, I think. After a while, when the people still didn't go away, he started hissing at them to make them go away. Some of them did, but because they were getting bored not because they understood that he wanted to be alone. Still, most of them stayed despite his obvious annoyance.

I was standing in front of the cage next to his, because people were inspecting it and it looked funny seeing humans in one of those tiny cages. I didn't get a good picture, though, otherwise it would be on here. So I walked back to Giuliana, who was also in front of the leopard's cage with the others, trying to capture him. I stood next to her and looked up to the little guy when he decided he'd had enough of us stupid humans, turned around away from us, lifted his tail and peed on us.

Unfortunately, I was standing in the middle of the group at that precise moment and caught the bulk of it. The bulk. In my face. IN MY FACE!!!

Still, it wasn't really that incredibly bad. Just very, very bad - but not incredibly bad. After all, we're not talking peeing as in fully relieving himself, we're talking little drops of pee that he sprayed over the group to make us all go away - which we were already in the process of doing, impatient little bugger! But he got me, he got me good. I'm still so happy I just happened to have a refreshing tissue with me that day and was thus able to clean myself right away: my shoulders, my chest and my freaking face. [S]he cried out twice, a cry that was no more than a breath: "The horror! The horror!"*

On the other hand, though, who has that kind of story to tell? Right? You saw giraffes on a safari? You swam with dolphins? Have you ever been peed on by a leopard? See, it's actually really cool this happened to me.

This is what I've been trying to tell myself ever since. "It's a story to tell to future generations (as if...)." and "Nobody else can say that's happened to them." and "Don't worry, it all came off with that tissue and you also took that long shower with a lot of soap afterwards." It doesn't work though, it's still so gross to think about it and I also feel like it's so unfair! I wasn't the one annoying him! I was just in the wrong place at the wrong time - bathroom time. Oh man... now that I think about it again I actually do feel it: What a B!TCH!!!

OK, you can stop laughing now. Seriously. Shut up!

Look at the pretty flower, doesn't that take your mind right off the story you just read? It should, it's so pretty, look at it. Look at it!! 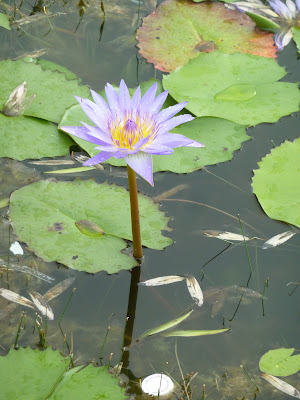 Actually, this is for Béatrice, miss you.

What a pretty flower, right? OK, now. Change of topic. Let's talk about the perception of time in the Caribbean. I've a story for that, too. Less entertaining, but I gave you one really good one so now you have to endure the not-so-good ones too. Take it like a man!

After coming home yesterday afternoon a bit before 4.30PM, Susanne, Giuliana and me decided to go get our nails done, because there's a beauty salon right down the block from our hotel and we had more and an hour and a half before the night's lecture. I know I just had a pedicure and manicure in Miami, but can you really ever have too many mani-pedis? I don't think so. So we went, because the girl who did it said it wouldn't take longer than 20 or 25 minutes per person. Perfect! Enough time to get our nails done, get some food and get ready for the lecture at 6PM. Only, it wasn't. Because the pedicures didn't take 25min each. They took over an hour each! We didn't know for sure for the longest time, because none of us have a watch or a cell phone, but we discovered the wall clock in the salon at 6.15PM and became more and more nervous and anxious with every passing minute. She did not care at all, even though she could see we were getting anxious and we had told her about being students and having classes in Georgetown. She just kept on going as slowly as ever, calm as can be and completely relaxed. Thing is, Christian is not the kind of professor whose lesson you want to be late to, so we couldn't relax like she did... but we were lucky, it was fine in the end because he didn't even care we were late! And now we all have pretty nails, which is really the most important thing, right?

Susanne did a calculation afterwards, measuring the suggested duration of the pedicure agains the time it actually took and now we know for certain: A Caribbean minute equals 7.5 European or North American minutes. Write that down (Or even better, bookmark this blog post!), in case you come here some time and find yourself in the same situation.

This morning, after getting up way too early, we went to an anthropological museum here in the city, then after that we went to the University of Guyana, where we got to talk to two local professors who shared their views and stories about the country and its interior and exterior relations with us, and after that we went to the archive. That was the best part for me, because a) I love archives and b) I'd just gotten over the highest and thus worst part of the sleepiness-curve and could concentrate on something other than merely keeping my eyes open. Great! And Susanne and I also had a very nice time talking to Karen, the secretary of the head archiver, who had studied in Cuba and spoke to us in fluent Spanish. 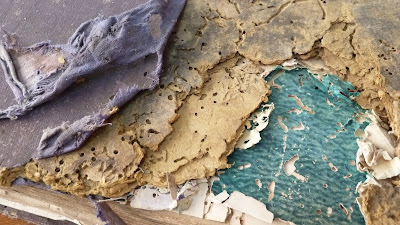 Apart from the archive, though, nothing happened that was of sufficient importance or interest to justify being mentioned here. I think I've already told you too much boring stuff. Sorry about that, but you'll have to live with it. If I'm not entertained, you don't get to be entertained - it's only fair!

Oh, before I let you go, a quick fun fact about Guyana: Public Safety is not a top priority here! 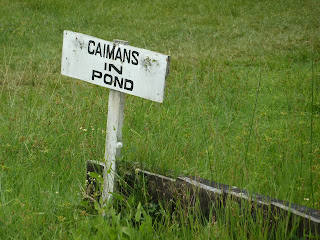 Caimans: yes. Fences around that pond: no!!!

So, no matter if it's a wild cat peeing in your face or a caiman jumping out from under blooming lotuses that lure you to the edge of the pond with their amazing beauty, nature will surprise you in this country.

* If you can quote the book these words are from you get a cookie from me!!

Posted by isaontheway at 8:26 PM