As mentioned in the last post (Is it me or do I really refer to the previous post in every entry I write?) I went to Key West with Tonii for two days and a night from the day before yesterday to yesterday. The trip was great, I had such a great time - I like to think we both did, actually - and a lot of fun exploring all about Key West. I had been there before, but only for a day. Last year, two other CSers and me went to Key West leaving in the early morning and coming back late at night the same day. This time, we stayed the night, which made a huge difference.

Tonii is a US Navy veteran, so we got to stay at one of the Navy Gateway Inns & Suites, where active, reserve and retired military people get to stay - and their families and friends when accompanied by them and with an official approval. This was much cheaper than the average hostel, hotel, motel or BnB on the island, which is why we could afford the luxury of staying two days. It was an adventure for me, because I'd never even been on a Navy Base before. Obviously, we didn't even go close to anything military, but nevertheless the Gateway Inn was located in Trumbo Point, which is pretty cool.

We started out really early, or, well, we were going to start out really early but what with last minute preparations, we didn't make it on the road as such until about 6.30AM. But that was still early enough! 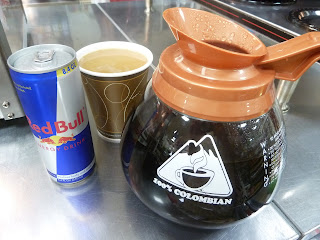 On the road with the combined forces of Austria and Colombia! 7/11 never lets me down.

So it was down South through Miami, the slower route as we wanted to avoid toll roads, and after about an hour or maybe an hour and a half (sithloads of people on the road on their way to work) we made it out of the city and onto the part of Federal Highway 1 (aka US 1 or A1A) that's part road and part bridge between the Keys. Tonii drove on the way down, I only took the wheel for the last 30min or so, so I got to take lots of pictures of the Keys we passed, the bridges and the cars in front of us and coming at us (that last part was unvoluntary). 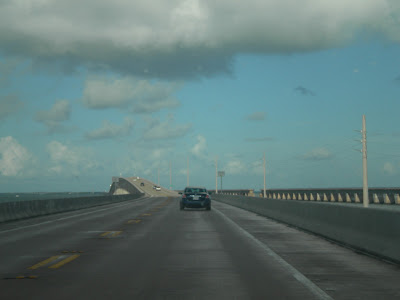 Around 11AM, after a total of approximately 4.5 hours, we made it to Key West and headed over to the base to park the car, put our stuff in the room and freshen up before exploring the island and the town. Only the guards at the NAS wouldn't let me past the outer gate because I was a foreign citizen and not approved. Because we planned the trip so spontaneously, Tonii had forgotten that I, as an Austrian, couldn't get anywhere on a military site without previous checking and authorization. Oops. So we had to turn around, go to Boca Chica (another Key 7 miles north) and fill out some paperwork for them to check. I'm not going into any details as to what that checking involved or how it works or anything like that, the only important thing is that we got my approval and didn't have to sleep on the beach. And here's what I love about this whole experience: there was a young officer, he was the one to finally let me in through the main gate to the Gateway Inn. After getting the OK from his superiors or whoever it was he had talked to, he gave me back my passport and then leaned down to the car window and said: "One last question...-" ::nervousnervousnervous:: "-...how did you like Colombia?" Turns out he was Colombian himself! And he had seen all the stamps from Bogotá and Cartagena in my passport and he was really happy to hear that it was my favourite country. I love this!

Now, this process had taken a while - and we were lucky it wasn't much longer because it could have been - so we couldn't leave everything by the Inn as we had originally planned. The new plan was to get some more breakfast and then drive around Key West until we found a good place to park. 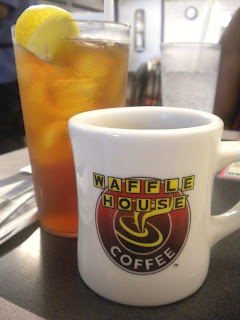 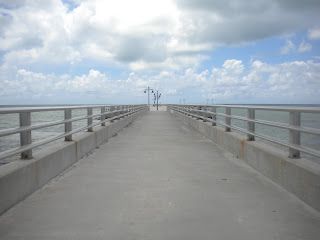 The pier at Higgs Beach. 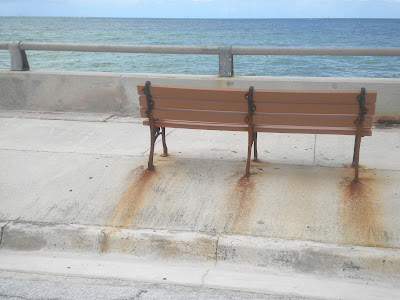 I like this picture. Weatherworn bench on the pier.
First, we went to Higgs Beach. Not really on purpose, but somehow - no matter how many different right or left turns we took - we kept arriving back at this point. It ended up being really interesting, because that's where the Key West African Cemetery is located. There's a memorial right by the beach and various signposts explain the history of the site.

After reading all about the cemetery and its history and walking around the beach and out onto the pier for a little bit, we got back in the car and did the big tour, US 1 South and then from Mile 0 back up on US 1 North, all around Key West. And then, because we really had to finally get there, we went to Duval Street. 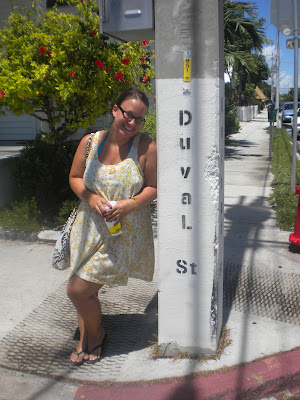 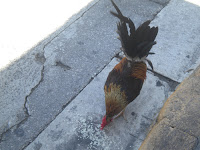 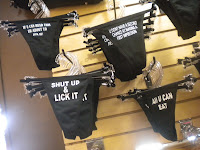 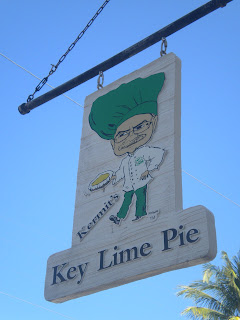 After spending the better part of the day on and around Duval Street, we went back to the base to see if I'd gotten the approval - which you already know I did. We parked the car (finally for free) and checked into the Inn and then we went to our beautiful, beautiful room. I hadn't stayed in a hotel since Istanbul, so I was totally blown away by what we got: 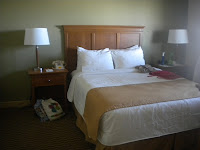 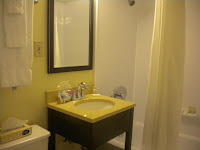 Later, after a hot shower and a little web-checking, we went back out to go look for the best spot to see the famous Key West Sunset and get some good lobster into our bellies. We missed the big Key West Lobster Fest by a day, but that didn't disencourage us from looking for a good deal on yummy food.

We found the sunset at Mallory Square and instead of talking about it I'm only posting a few pictures: 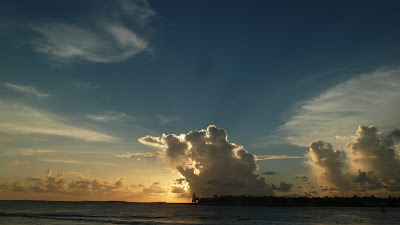 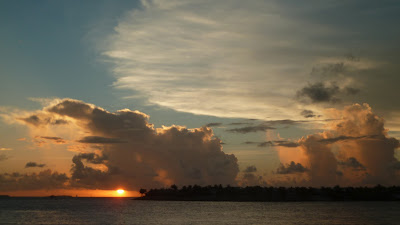 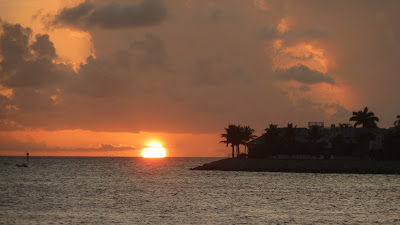 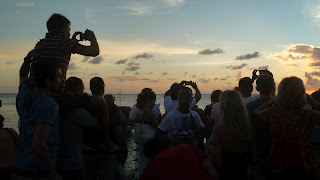 So many people were trying to snap a shot of the setting sun, these three guys had to get creative to catch a glimpse and get a good picture of the sunset. I call a win.

Now, the only thing we had left to do to complete our day and be able to fall into bed and sleep was to get ourselves a good lobster dinner, which we did at a very nice place called The Boathouse in the area of the harbour, where all the yachts are. I had Broiled Florida Lobster Tail with rosemary potatoes and a fresh salad. Even though it wasn't as good as the lobster I've had on Isla Grande in Colombia, it was delicious! Yes, you may be jealous. 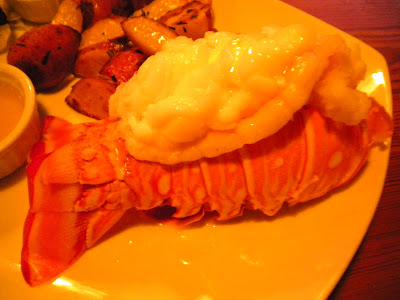 Now I've got to go, I'm at FLL Hollywood Int'l Airport and they just started boarding for my Spirit flight #100 to SXM Princess Juliana Int'l Airport in Sint Maarten. I was nervous about this flight, because international flights with Spirit out of FLL tend to be stressful, or at least the part where you try to get to your gate usually is. This is where I missed my flight to Cartagena last year and saw people missing their flights to Sint Maarten, Jamaica and other places, because Spirit hadn't opened enough check-in counters for all the international departures. Everything worked fine today, though, because of the self-check-in. And I got a window seat!

Key West Day Two and more New York City in a little while, I've got to get on my plane now!