A long way down.


Not talking about the Nick Hornby novel, although that is a good book and definitely worth talking about, even if it's not my favourite of his - oops, getting side-tracked. I'm talking about my way back down to Florida from New Jersey.

I was supposed to fly out of Atlantic City at 7.12PM and arrive in Fort Lauderdale at 9.38PM. That was already too late for the regular check in at the hostel, because their office is only manned until 11PM. Although, now that I think about it, that might even have worked, because it's so close to the airport and as long as there wasn't any trouble with the luggage, it can't possibly take longer than 20min tops to get to the hostel from the airport. Or so I thought... more on that later.

Instead of 7.12PM, we finally took off after 10.35PM (that's the time I turned my phone off, but we still had to wait a little after that). The delay in Atlantic City wasn't that bad, because I had my kindle to read and I also got myself two girlie magazines (something I never do outside an airport, but when there's planes and people around me, I always find myself wanting to read about dresses and lipgloss and who's hot this summer...) and of course I had my laptop.

I was going to write all about New York City - yes, I went!! - and the things I saw and did and ate there, but ACY's internet didn't work. Well, it worked alright, but it was so slow it was torture! This is what I got when I tried to open Facebook:

WTF? Not even my name?

After two hours of continuously trying to open any page that would allow me to communicate with the outside world, I finally managed to post a status update on Facebook and tweet about being stuck. Not that it did anything for me, because if anybody responded to that I wouldn't be able to see it. But I got to let out my (mild) frustration, so it was good. 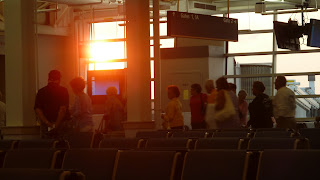 Sunset at ACY, and other people boarding their flight.

The flight itself was pretty good, because first, I sat next to a very nice old couple, originally from Philadelphia but now living in Fort Lauderdale, and second, I sat in 2A. Second row, window, tons of leg space! Enjoyed that very much, because I got to stretch out properly and without having to worry about kicking the front guy's back every time I shift my weight in my seat.

We arrived in Fort Lauderdale pretty quickly, too, and so did the luggage. My backpack was among the first bags to emerge from the hidden depths of the airport behind-the-scenes. I had gotten a tip from Jason (Thanks, Jason!) about a shuttle service, that took you from the airport to wherever you needed to go for very little money. To give you an idea, a taxi to Hollywood Beach would usually cost you 25-30 USD, my trip cost 13 USD. They're located right in front of the main exit of the arrivals in FLL, so you just go outside and walk to their desk-thingey and they'll let you know if somebody can take you right away, if you have to wait a bit for a car (never longer than 30min, that's their policy) and how many other people will be travelling with you.

Now, back to what I said before, you know, the "or so I thought". Two other people and I waited for about 10min and then a town car, with one passenger inside already, came to pick us up and take us to our respective homes/hotels. Everybody gave the driver their address and he coordinated them so he could drop us off in a time-saving and orderly fashion. Only problem, he replaced my "that's in Hollywood" with "that's in Miami". Oh man...

When he passed my exit on I95 I thought that maybe one of the other people was close by and he wanted to drop them off first, then me and then everybody else. Even though that thought didn't make much sense, because with my location I was the natural first. After about ten minutes he looked at me through the rearview mirror and asked if I knew the area well enough to help him find the place. So I said "Well, I know my area well enough to guide you, but you passed my exit ten minutes ago". I'm really proud of myself for not screaming at him when I saw his facial expression change.

I figured, there's not much I can do about this, anger won't get me home quicker and we're already so far away from my place, he'll have three pissed people in the car if he turns around and does drop me off first. So I put on my not-exactly-nice-but-neutral-enough face and just watched as we drove ever further South. For over one and a half freaking hours!!

When he had dropped the last guy off - all the way down in freaking South Beach - I hate South Beach!! - and after apologizing about three times and thanking me for my patience another three, he turned back onto I95, but now, finally, North. He had a bright moment there and took the Express Lane, which made up for how embarrassed he was when he had to ask for my help with the roundabouts on Hollywood Boulevard. (I thought you did this for a living?)

We finally got to my place, the Hollywood Beach Suites, Hostel + Hotel, a little after 3AM. He was very smart and told me the ride was on him, as in I didn't have to pay. I would have paid (I was like, I will pay you if you make me, but I really, really don't feel like it), but then I also would have sent a complaint to his superiors. This way I decided to go easy and not report it. He was already sorry (seriously, extremely, very sorry) and embarrassed (oh so embarrassed) and with him understanding how very unprofessional he had been and showing common courtesy by not taking my money,.. well it was OK for me then.

My roomkey and information were waiting for me in an envelope in the mailbox by the hostel's office and I got to go straight to bed. I didn't take my clothes off, I didn't brush my teeth, I just put down my bag and got into bed. This morning (or, later this morning) all the other girls from that dorm checked out, so I was woken pretty early by their packing and getting ready. But there's only one other girl coming in tonight and the dorm won't fill up again until tomorrow, so I'll sleep well enough tonight. And I think I might nap a little later, too. With everybody gone I also got to switch from my assigned top bunk to a bottom bunk, so I don't have to climb that uncomfortable ladder to lie down and can go to sleep whenever I want to without having to think eight times about what I need to bring so I don't have to get back up (laptop, kindle, phone, water, etc...).

On this note, I'm going to go get some breakfast and then I'm off to the beach.