Stop number two on my criss-cross trip around the Caribbean: Santo Domingo, República Dominicana. I didn't really know what to expect from that city, because I did no preparative reading whatsoever and the only information I had came from my good friend Andrés, who's from Cali but lived in DR for a year. And I'd gotten a bit of information from my CouchSurfing hosts Luis and Liza, but that was more about themselves and our time together than the city per sé.

So I arrived there knowing next to nothing about the place and if I'm honest, I didn't know that much more when I left. So I'm not going to write very much here and just post some of the surprisingly few pictures I took there - that says it all, though, doesn't it? 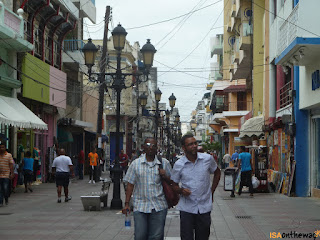 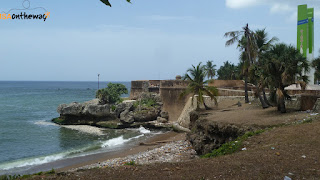 Where the street Palo Hincado, the limit of the colonial zone, meets the sea. 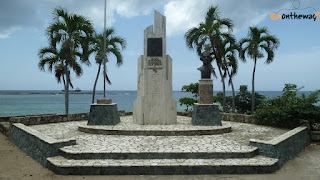 Monument to the new government after the fall of the dictator Trujillo. 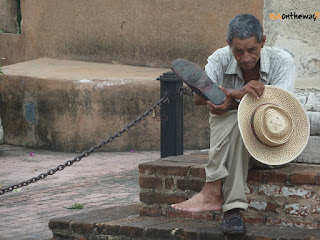 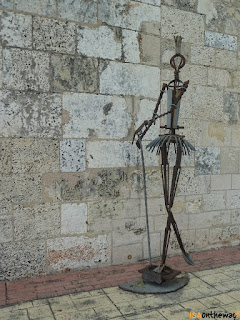 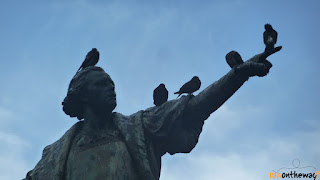 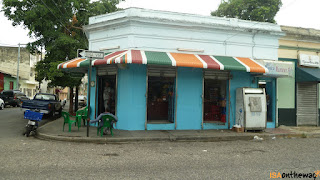 Jason and I found shelter at this little tienda, or colmado, as they call them in DR, when it suddenly started raining. It did that a lot while I was in Santo Domingo, it was never just sunny. The tienda was cool though, the owner was having a great time blasting Bachata and Reguetón through the neighbourhood at full volume and he was nice. 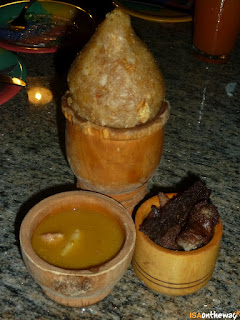 On my last evening Jason, Luis, Liza and I went out for dinner together and I finally got to do something nice for them by inviting them after everything they'd done for me. What you see here is Luis' mofongo de yuca (the big one in the back) with sancocho (left) and carne asada (right). I'm not sure what exactly mofongo is, but it's pretty tasty!!

I'll be honest. I didn't really like Santo Domingo. I'm sorry for this, I tried, really. Honestly, though, I didn't feel welcome there. Oh, don't get me wrong, I felt very welcome when I was with Luis and Liza - such sweet people! - but not anywhere else nor by anyone else. When I asked questions, I'd get snappy and annoyed answers and people looking at me like I was trying to waste their time and should be punished for it. Half the time it seemed like people were deliberately speaking unintelligibly, I'd actually understand more when they were talking to each other than when they were talking to me. And of course the weather was a problem, because more often than not it would suddenly start drizzling or properly raining and all you could do was search refuge in a building's entrance or one of the tiendas, like we did that one time. And the city was so much dirtier, so much more run-down than any other city I've ever been to in Latin America and the Caribbean, and that's a few. This one is definitely not making my list of favourites. I don't know. I guess it wasn't meant to be.

For me, thinking of the Dominican Republic will always equal thinking of Luis and Liza, because they were the one really good thing about my trip. They organized a cell phone for me so I could get in touch with them at any time, they regularly picked me up (not just from the ferry dock, also from other places so I wouldn't have to walk home or take a taxi), they gave me a really long tour of the city by night one evening where I saw more than I saw in my 3 days of walking around by myself - unfortunately it was dark so I couldn't take pictures there - and explained everything about everything we saw. Like the place called Alaska (derived from Las Cabañas: me voy a las cabañas turns into me voy a Alaska) where young couples (and older couples) (and more people, we saw a party of three at one point) can rent motel-like rooms when they don't have anywhere else to go and "like each other very much". Funny place! Oh, the things they showed me from that car and the anecdotes they shared with me, that's what every day should have been like! Only I didn't get to those places walking by myself and the weather by day wasn't half as nice as by night....

Sorry I don't have more stories.

Posted by isaontheway at 4:54 PM