Everything was going absolutely wonderfully. Almost perfectly. Too good to be true? Maybe. But I hope not. Because that would mean that something like this will happen every time I get to a really good place in my life and I refuse to accept that. That'd be scary and being scared and pessimistic, that's not the kind of attitude I'm going for. But for now, here's what happened.

I got my car, I learned to drive it ::likeaboss:: pretty fast and for most places didn't even use the GPS anymore, because I do orient myself quickly. Once I've found a way, I'll always find it. You'll know that if you've been to a new city with me and have had me give you directions the day after getting there. It works the same in cars, apparently. Didn't know that, but it's good.

Also figured out how to hook up my MP3 to the car's sound system and made a special playlist for that. And with knowing my way around the area, I didn't have to keep the volume low so I could hear the GPS lady give me highly useful information along the lines of "stay on the current road in 2 miles". Once you ride on the Interstate or along some Boulevard with Jiggy D and Wiz Khalifa blasting at next to full volume, with the bass turned up really high... let's just say it doesn't really get much better than that.

And of course, the destination helps too: 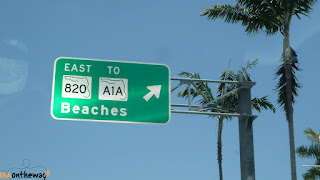 Beaches, that's where I spent most of my time. Even went back to South Beach one evening to meet some CouchSurfers, but my opinion of South Beach still hasn't changed: too crowded, too fast-paced, too party. I don't care if Hollywood is for old people, I don't care if this makes me one of them. I like it there, so I go there.

Let me show you why I like it, here's pictures: 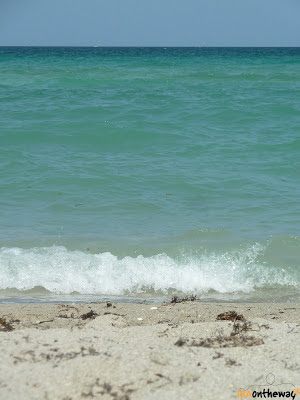 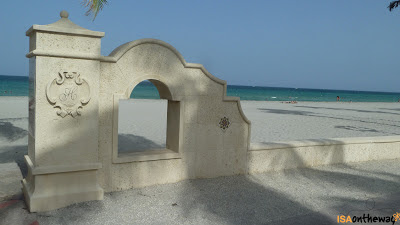 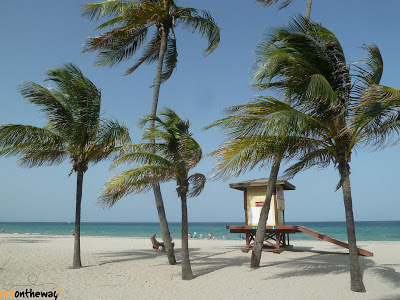 And on the Broadwalk there's lots of cafés, bars and restaurants, there's a Ben & Jerry's and a frozen yoghurt place, there's mini-markets where you can buy food and drinks at almost the same price as in a big supermarket, there's live music all over the place and it's just nice. Nice is the perfect word to describe Hollywood Beach. For me, it's the perfect place to relax and I'm looking forward to going there again this afternoon (if it stops raining) or tomorrow.

The plan was to keep doing exactly that - commute between Plantation and Hollywood - until Tuesday, when I'd return the car in the morning and go straight to check-in for my flight to Philadelphia. Then come back, getting a car again upon arrival, and have another week of relax-time before moving on to St. Maarten.

But, alas, it was not meant to be and everything basically came apart yesterday.

Yesterday sucked. Bad. It's all pretty much under control now and it wasn't even that bad to begin with, but just like with my arrival in Puerto Rico, that first stretch of time between getting a piece of negative information and figuring out what to do... well, it sucks.

This is what happened. First, I did a regular check on my bank account. Only my bank account didn't look so regular. Nothing like last year's problem, when all of a sudden my balance was approximately - 400,000.00 EUR. Yes, that's a minus right there... But a problem nevertheless, because there'd been an unauthorized and unjustified transaction. Spent a lot of time on the computer calling people from Skype and sending e-mails. I'm so glad Béa happened to be online when I discovered the problem, I might have freaked out if she hadn't told me that I could just get in touch with my credit card company for help instead of tracking down the people who took my money. Now I'm fighting along with my credit card company to get those almost 300.00 USD back. So, money trouble, first thing.

Then, after picking up Ken from work that evening (boss-people didn't give him a car so I dropped him off there and picked him back up, because now I'm the one with wheels) he told me that he's going to have to travel on Sunday. For work. To LA. For a so-far undetermined amount of time. I'm still here until Tuesday and will be back next Saturday and as I was originally supposed to stay with him the whole time I'm in Florida, I asked if it would be a problem to just leave me the keys as we'd both be back soon anyways. He said yes, as in it would be a problem, and that I would have to find another place to stay from Sunday until Tuesday, which I accept and comprehend. This is CS, after all, and I can understand his decision 100%. It is still awesome that he would have let me stay for the whole three weeks if he hadn't had to travel and staying here for a total of 9 days before he leaves for LA is also really, really, seriously great. His hospitality is unmatched so far and I am very thankful. But no matter how much I can comprehend it and relate to his reasoning, it was still a kick in the nuts - sorry for this crude expression. Possible-homelessness-trouble, second thing.

That put me under a lot of pressure concerning everything I have to get done here before I leave for Philadelphia and, later, for St. Maarten. So time trouble, third thing.

But I did what I always (try to) do in these kinds of situation and took three deep breaths and then sat down to figure out how to proceed. This is a figure of speech, though, don't take me too literally. I don't know how many deep breaths I took, it might have been five, and I didn't sit down either, I just stood in front of my netbook, which was on the kitchen counter.

I really did figure out what to do, though, so that part's true!

First thing I did was to text a CouchSurfer I was in touch with already who'd originally said he could host me for a few days, but who I had to turn down because of the three-week offer from Ken. I explained my situation to him and asked if it would be possible for me to stay with him for two nights. And immediately after that I also posted a message in the Miami Emergency Couch group on the website, just in case he didn't answer or couldn't/didn't want to host me. He did though, half an hour after sending my initial message I had a confirmed new place to stay. This is Eric, he lives in Fort Lauderdale and has a boat. And he also has a big heart and helps people who are in trouble. Like me.

Second thing was to get Google Directions from Ken's house to Eric's house and then from Eric's house to FLL Hollywood International Airport, where I have to return the car and take my flight on Tuesday. Because leaving Ken's place includes giving him back his GPS, which he was kind enough to lend me for this whole time I've had the car.

Third thing was to make a plan for today and figure out how and when to do all that other stuff that still needed to be done. So in the morning I dropped Ken off at work, and that happens to be right next to the post office, where I had to go because I have too much stuff and had to get rid of some of it (not rid rid, only temporarily, because I'll need it when I'm home). Unfortunately, the post office didn't open until 9AM, so instead of waiting for an hour (yes, I was out rather early today) I went to Kinko's to get all my flight informations and the Google Directions printed out, because who knows when I'll get access to a printer... There was a problem with the self-service printer so the guy at the counter had to print my documents directly from his computer, but it was alright, because when all was ready it was right on time to go back to the post office. So I did that and sent my excess clothing to my friend Stiven back home (as in Cartagena), who gave me all the information I needed for sending him my stuff last night in a kind of emergency-Skype-meeting, before even finding out what it was I was sending. Now my backpack will be a lot easier to handle and carry on the crazy criss-cross-caribbean part of the trip. Next on the list was calling Austria, so I went back to the apartment and got online. Talked to my mom for a bit to get a kind of emotional boost (I needed after yesterday's shock) and to get updates about everything that's going on over there (regular updates from my dad via e-mail and gmail chat, so I get to talk to everyone, which I love). After that, I talked to Eric about when to come by tomorrow and then I talked to Mari about when to meet again. Now I've got some clothes in the washer and as soon as they're ready I'll pack all my stuff so all I have to do is throw the backpack into the car and get going.

As for what to do after coming back from Philadelphia, I really didn't want to risk being in the same situation all over again and also, as of now Ken still doesn't know how long he has to stay in LA for. So I went and booked a dorm bed in my favourite hotel in all of Florida: The Hollywood Beach Suites, Hostel + Hotel. Right in Hollywood, one block from the Broadwalk, around the corner from this wonderful little place you see in the next picture and in the centre of everything I love in Hollywood. This way, I won't even need a car anymore after I come back. 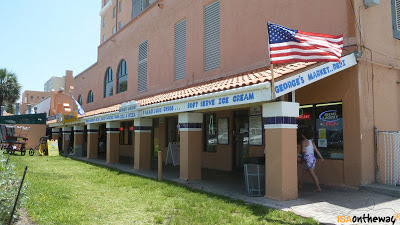 This is the little store I went to a lot last July and when I came back in December, the shopkeeper still remembered me. I told you about this, I think. And they have $1 Arizona Ice Tea!!!

So, yet again another disaster has been averted. I wonder why it has to be like this, though... everything is perfect and then all of a sudden 3 things go wrong at the same time... But still, as you well see - I am still the luckiest person in the world. I could get in touch with my credit card company and they will help me solve the problem with the money, I am not in the streets because CouchSurfers are awesome people, I will be right by my favourite beach for a week after I come back from Philadelphia.

Lesson learned from this experience? None. Because this isn't the first time this kind of thing happens to me and I already knew how to handle a situation like this, with Plan Bs and stay-calm-and-go-through-your-options. And I already knew that my friends and family are the best people in the world and always there for me.

Everything will be fine.

Posted by isaontheway at 1:44 PM