I made it! I'm here! And I'm already in love with San Juan! It's such a beautiful place and it reminds me of my Cartagena so much and the people are so nice and ... but first, how I got here.

Yesterday we all got up at 5AM and a bit, then the very typical I-hate-mornings routine of a quick shower and a lot of silent cursing. A little before 6AM Peter (emotional support for my mom) and Iris (the best one person farewell-committee ever) came over and we all got into the car and went to the airport. I got to drive one more time, who knows how long it'll be until the next time I sit behind a steering wheel. Then, at the airport I checked in my luggage and got my boarding passes and sat down with a nice breakfast. 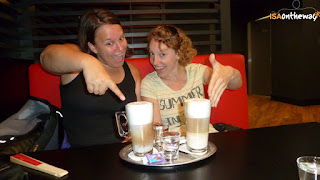 The flight to FRA was short and easy and I got the best in-flight entertainment ever: watching the guy next to me struggle to drink his water during turbulence (LOL). I know it's not nice, but it was really funny and it was only water, it's not like he could have burned himself or anything. You would have laughed too! Shut up!

OK, skip to FRA and have a look at the next boarding pass. Read "Boarding time: 10:15" and hear someone saying "Oh, it's 7 past 10" in the background. Freak out because you don't know which gate is yours and there are no information screens anywhere. Meet a girl who's also going to San Juan and knows the gate number. Score!! So from then on everything went pretty smoothly, we did have to wait around a lot in the airport after running to our gate, because they only set the boarding time so early due to all the controls you have to undergo when you travel into the USA, but it went fine. Even though one of the officers had said I was blocked from the flight, everyone else let me through without any trouble. Never even found out why I was supposed to be blocked. The flight itself went by rather quickly, between meals/snacks and drinks and the very nice movie selection (Descendants, One Day and Despicable Me) I didn't even feel like it really was 8:55hrs in the air.

Arriving in SJU was great. Everyone at the airport was nice and helpful and there were no ATM troubles and no troubles finding transportation into the city and, well, all went well.

Until I tried reaching my CouchSurfing host.

I called from the cell phone of the guy who carried my backpack to the taxi (no tip, he was just being nice - he knew all along I had no small change), from the cell phone of the taxi driver, from the cell phone of a guy in a shop on Plaza Colón (who also changed a dollar into quarters for me in case I found a working payphone), from the cell phone of the owner of the Food Court on Plaza Colón and from Skype. Did I mention already, how nice the people here are? Around the time of the fifth phone call I was getting a little bit desperate, because I'd just arrived and was hot and still wearing my jeans and closed shoes and I had my huge backpack and nowhere to go and noone to talk to and nothing to drink and my phone didn't work and the payphone didn't work and how many more people would let me use their's. Just imagine for a second leaving everything you have behind to go to a new place (one-way ticket, remember) and then getting there and standing in a town square completely alone. You know you're going to be fine, but in that moment...

But - because I am the luckiest person in the world and greatful for it every single day - another CouchSurfer who's travelling around PR right now, Christiane, sent me her host's number so I could get in touch and we could meet. So I did call her host and asked if she knew a place I could go even just to wait for a few hours because I'd been stood up and was sort of lost, not in the geographical sense, but in every other sense. She said there was a hostel right above me (I was calling from the Food Court) and that it was very nice and not that expensive so I could even stay there in case I never reached my host. I was pretty panicky by then and allowed myself to cry (just a few sobs and tears) in the elevator on the way from the ground floor to the fourth floor, where I was told the hostel was. Doors closed, OK you can cry now, get it out of your sytem, elevator stops, calm down and go on.

So I got out on the fourth floor, where I was told the hostel was. Only there was none. So I put my backpack (which for some reason kept getting heavier by the minute) down and walked up to the fifth floor. Nothing. Down to the third. Nothing. By pure coincidence, when I got back to the fourth floor, a door opened and a girl came out and I asked her if she knew where the hostel was. Turns out it was right there, only there were no signs because the reception and check-in were on the sixth floor. She was extremely nice and when she heard that I just needed to check my email really quickly (Maybe there was a message from my host explaining why he didn't pick up his phone?) she let me into her room and allowed me to use her WiFi. Did I mention already, how nice the people here are? There were no messages from my host, but from the other girl who said that she knew my host in person and so did her host! Solution right there!! So I called her host, Juju is her lovely name - just like one of my friends in the States -, and told her that she supposedly knew my host (as did Monica, the girl in the hostel, I found out later) and she really did and called him as well. He didn't pick up for her either but she was in the area and decided to come pick me up and take me with her until he turned up or answered his phone.

Five minutes later I was on the way to Juju's friend Michel's apartment. Between the two of them they carried my backpack for me because they decided I'd been through enough and needed to be helped. Although I'd already started feeling like sooooo much better the moment I saw them walk onto the Plaza... They took me to Michel's beautiful rooftop apartment's terrace and told me about themselves and San Juan and gave me water and kept calling my host. Juju is a friend of his and just like Monica in the hostel she assured me that it couldn't be on purpose and there had to be an explanation for his not being reachable.

And there was. He'd fallen asleep!

I heard that when Juju was talking to him on the phone and couldn't help starting to laugh. Because everything just dissolved, I'm not sure how to explain this. So Juju and Michel took me to my host's place, Abdiel is his name, and everything just ended up working out.

Of course it would have worked out no matter what happened. If I hadn't had Juju's number I would have asked for a place to go at the Food Court and they would have told me there was a hostel right upstairs. If Monica hadn't opened her door the moment I happened to stand in front of it, I would have found the real entrance (my plan had been to take the elevator to the top floor and just walk down until I found it) and then gotten online there. If Christiane hadn't told me that they knew Abdiel I would have kept on trying his cell phone every half hour, or every hour, until getting a hold of him. If I'd never gotten a hold of him I would have stayed in that hostel, which is a very nice one. But I had her number and Monica did open that door and Christiane told me that she knew Abdiel and we did get a hold of him and here I am sitting in the café where he works which is a beautiful and artsy place that plays music I love and the sun is shining outside...

Things to learn from an experience like this: Always have a backup contact, the more phone numbers the better (as in safer). CouchSurfing is wonderful, even this experience proves it, but it's always a good idea to have a Plan B. Don't panic. Or rather, panic! But panic for a minute (you're allowed to, it's understandable, cry if you need to) but then pull yourself back together and go on.

Oh, San Juan. It's a beautiful place. After putting my backpack into a corner and changing into clothes more appropriate for the Caribbean, I went back out, this time with Abdiel. He showed me around a little bit and we just walked around Old San Juan as it slowly got dark. I seriously like this place. It reminds me so much of Cartagena, it's almost as if I were home already.

And because this is US territory, there's cheap Arizona!!! 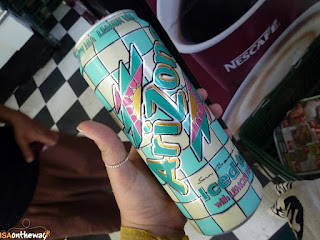 After a while of walking around the old town we walked to El Morro, a fortification at the tip of the little peninsula that is Old San Juan, and sat down on a little cliff-like thing (I don't really know, it was dark and I wasn't wearing glasses) and just watched the sea and the clouds and the stars that were slowly coming out. And the breeze, oh the breeze...

If it hadn't been for the fact that my body wasn't even sure what time zone it was really in, I would have stayed there forever. And also, there were no toilets. We would have had to leave sooner or later. But it was so nice to just sit there and enjoy the coolness of the wind and do nothing. 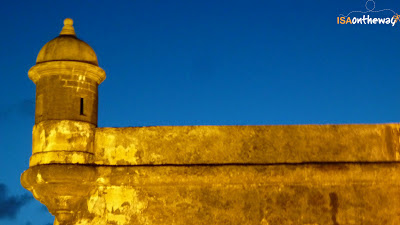 So this is where I am now.
More updates ontheway.