Usually on this trip (and on most of my trips) I travel by air or take a bus, but I went from San Juan, Puerto Rico, to Santo Domingo, Dominican Republic, by boat. I booked via the dominican company Colonial Tours Travel and the trip was operated by America Cruise Ferries. It would have been a lot quicker to just fly, it's supposed to be just 45min and the boat trip did take something like 13hrs, but I love the water and being in it and on it and around it so when I saw there was the possibility of taking a ferry I just jumped at it.

The ships leave from Muelle Panamericano 2 in San Juan and arrive at the docks that are up the river Ozama in Santo Domingo, right next to the colonial part of town. The trip's from 7PM to 8AM and you can simply get your ticket and travel in the open area of the ship, which many people did, but you can get a cabin as well, so you can actually get some real sleep. That's what I did. I made my reservation for a single cabin, a pretty simple little thing, but when I finally got the invoice and paid Colonial Tours they told me that my reserved room wasn't available anymore but that I could switch to a suite for a few more dollars.

I went for it and got the suite, I wasn't going to travel on the ship as if it was an airplane - if you do it, do it right. And, man, that was the right decision! 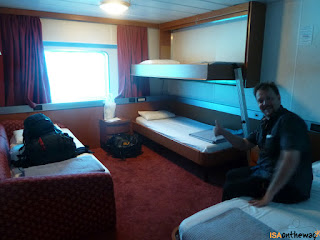 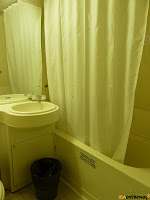 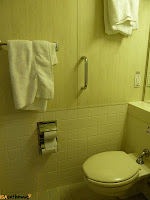 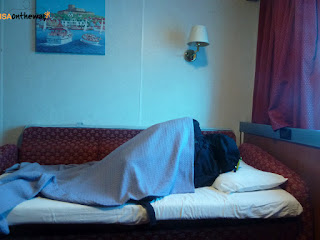 My backpack got to rest as well, he had his own bed too.

Hey, wait, what? Why is there a guy in the first picture? Who is he and what's he doing in isa's suite? It's all OK, nobody worry. That's Jason. I picked up a stray as I have so often before. It's because I'm a CouchSurfer, nothing I can do against it.

The thing is that I'd told Monika (the girl from the hostel) that I was taking the ferry to Santo Domingo and she remembered one of the guests telling her that he was also taking that exact same trip. So she got us in touch, because then we could find the dock and everything together and not be alone on the boat. Originally, we'd agreed that he could leave his things in my room while he slept wherever, so he wouldn't have to worry about something getting stolen while he rested. But, of course, when I saw I had four beds I said he could take one. So I got myself a roommate for the night on the boat, he's not a CouchSurfer but he surfed my suite so he's an honorary one now.

It was sad to leave San Juan, but the view from the ship was great. 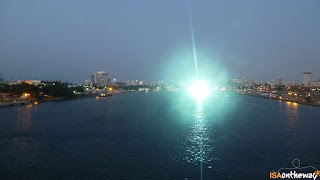 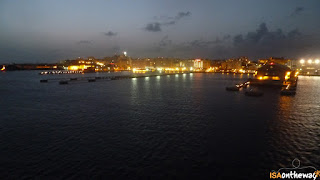 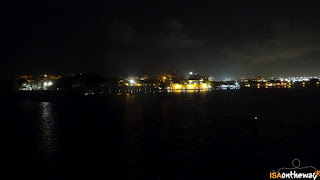 The trip itself was very calm, no rough sea or bad weather at all. Also inside the ship there wasn't much going on. The people who didn't have rooms had fun in the casino and restaurant and in the bar/entertainment area, but Jason and I just spent some time outside and then went to read some and sleep.

Being on deck was crazy for me, though. Like, seriously crazy.

I haven't told many people this - simply because it's not something that comes up in a random conversation -, but it kind of freaks me out when I have an overnight flight over the Atlantic and the skies are clear. No "if I have a window seat", because I always make sure I do for long flights. It's so weird, you know. Everything under you is completely black and above and around you it's also completely black. And you see so many stars! So it almost feels like there's nothing keeping the plane down inside the Earth's athmosphere and if the pilot tips the plane's nose up for a sec we'll just go into space! When I'm on a flight like that and I look out the window I have to constantly remind myself that that's not possible - which of course I know, but fears aren't known for their rationality.

So being on that ship at night, I assume you can already guess what's coming...

Let me just show you these pictures by means of an explanation of what went down inside my head. 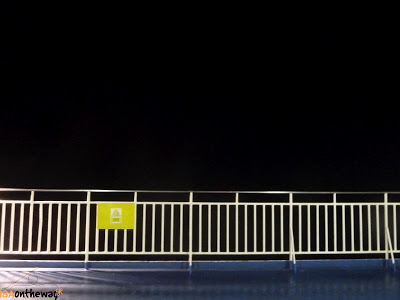 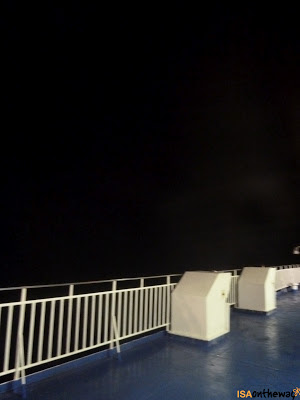 It's black. Black! Nothing out there but blackness! BLACKNESS!! NOTHING OUT THERE!!!

You would not believe how freaked out I was. I stepped out the door onto the deck and saw what was in front of me and I couldn't even walk away from the wall. I mean, BLACKNESS!! COMPLETE BLACKNESS!!! My stomach's tightening as I'm writing this...

So I got all my courage together and ran (ducking, sort of) over to the railing and then I stood there, holding on for dear life with both hands. Not just holding on, actually, I basically weaved my hands through the railing and then held on. The thing is, with everything being so utterly and extremely black, I got that same sensation that I described before, about being on an airplane at night over the sea. Only this time I wasn't inside a closed cabin. There was nothing between me and the nothing. Nothing! Oh gods... That was such a horrible sensation, because I kept feeling like if I let go I would fall off. And I'm not talking about falling off over the side of the boat. I mean falling up. I know that doesn't make any sense, but as I said before, fears are irrational. All I know is that I was freaking scared of having to walk back across the roofless deck in order to get back inside and into safety. Justin even offered to take me by the hand and walk me over! I refused, though. I wanted to prove to myself that I could do it. That's how I got those pictures too, there was nothing to hold on to where I was standing to take them. I went inside and got my camera just so I could show that I could do it, just stand there with no protection at all and take a picture of the nothing.

There's also a picture of me standing in the middle of the deck, trying to smile at the camera while trying to keep myself from running over to the railing or back inside. But I don't want to post it here because I don't like it.

Then after a while I remembered that the ship was going along the coast of PR and then after that along the coast of DR. If we'd taken the exit on the other side of the ship, all of what I just described would never have happened because I would have seen coastlights the whole time. Derp!!

No matter how stupid that sounds, I'm pretty proud of myself for going out onto the deck even though I was so scared. I like forcing myself out of my comfort zone. I would have been angry at myself forever if I hadn't done it. Just like the night before I forced myself to go talk to a guy at Nuyorican, where we went dancing. I saw him dancing and he was really good, loved his step. So I wanted to know where he'd learned but I got so unnecessarily nervous that it took me an hour to work up the courage to just go over and say "Hey, where did you learn to dance?". Glad I did it though, proved once again that I'm not that much of a chicken.

Oh and of course the ship arrived in Santo Domingo the next morning and the trip continued. But more of that another time. I'm seriously behind with my stories here...

Posted by isaontheway at 4:20 PM