Luck struck again and yesterday's feeling bad ended with yesterday. Or at least the bigger bulk of it did. I slept alright, but getting up was really difficult this morning and I drove to the airport in zombie mode. No problem though, because I knew the way - thanks Google, as always - and for most of the way mine was the only car on the road. Arrived there around 6AM, because I didn't know how long returning the car would take, but it was completely problem-free and I was done with the whole process and at the Spirit Terminal by 6.20AM. As in 4 hours before my flight... oops. Because it was a national flight I was accepted by the self-chec-in machine, which usually rejects my passport. Today it didn't and I even got to select my own seat for free. Thinking about it now, this day started out fabulously!

OK, skip ahead to boarding time. A few minutes before the actual boarding process began, there was a call for people who would volunteer their seats because the flight was overbooked. If you volunteered they'd guarantee you a seat on the afternoon flight and give you a voucher for a round-trip to and from any of their national and international destinations. As I knew that I wasn't going to meet Louizis until late in the evening anyways, I decided to offer my seat. Sure, by then I'd already started to like the idea of roaming around ACY for the afternoon, but I figured if I had the possibility, I might as well do something nice for somebody else who really needed to get to Atlantic City as soon as possible. So I went ahead with it and signed up for it along with a lady and her daughter, they'd asked for three volunteers. In the end all three of us got to go, I don't know what happened to the people who had wanted to fly but didn't have a seat. Maybe somebody else missed their flight and that's how they got open space..? Who knows, the point is I'm here now.

During the flight I'd started actually feeling excited about the trip - finally! That was when I really woke up, too. Arrived around noon and headed straight into the city to see the Boardwalk and the casinos and the beach and all that fun stuff. I don't drink (much) or gamble, so I'm not really ACY's target audience, but I'm still enjoying myself here.

The lady who drove the Jitney (yes, just like in the Hamptons) told me about this great sub place she insisted I had to have lunch at, so after orienting myself in the centre and getting my bus ticket to Philadelphia for later, I went to The White House Sub Shop and got myself a Cheese Steak Sub. According to that lady they're better here than in Philadelphia, because there they're made with Cheese Whiz (Is that what the stuff is called?), while here they're made with real cheese. 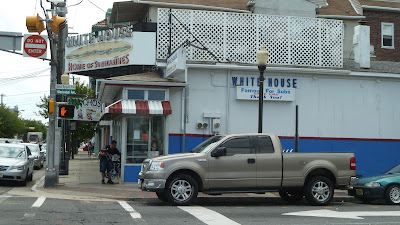 It's not on the Boardwalk and it's not overly fancy on the outside, you could almost oversee it... 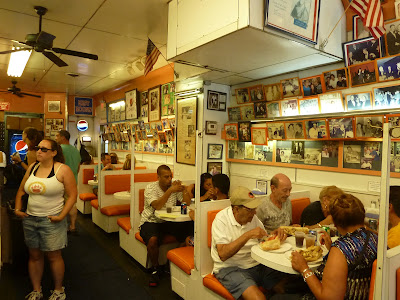 Cute booths, seats at the counter and hundreds of pictures of famous people who have eaten there. 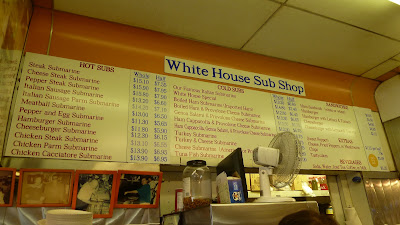 Wide variety of hot and cold subs, and the ones I've seen looked really good, too. And they're big!! 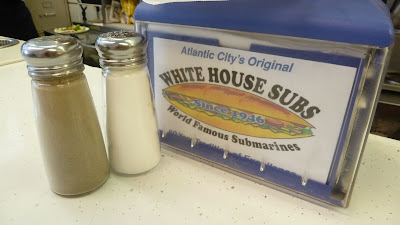 World famous, I'm not sure. But definitely very famous, there were people queueing all the way out into the street to get a booth... and lots of others ordered to take away. 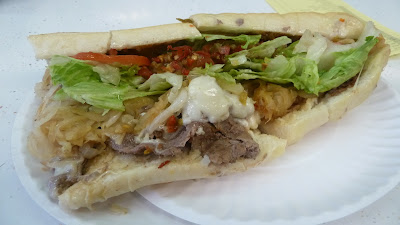 My lunch and second lunch (two hours later). Cheese steak with tomato and lettuce and salsa and fried onions. Dear Philadelphia, it will be hard for you to come up with a cheese steak that's better than this one.

Now, I'm already getting tired again, because I've been walking around in the blazing sun for most of the time since noon. But it's all good, because I'm going to catch a bus over to Philadelphia in about an hour and I can rest during the drive.

Looking forward to the next few days.

Posted by isaontheway at 6:17 PM