Today was my first bad day on this trip.

Of course, there's bad days on every trip, if you're out and about for long enough. I just didn't expect it to be this soon, because I've only been travelling for 20 days. I'm pretty sure I'm just exhausted, I hope I'm right. I did say that everything was going to be fine at the end of the last entry and I was right about that, so I'm optimistic about this, too.

The transfer from Ken's house to Eric's went very smoothly. Yesterday morning Ken accompanied me to get gas and actually help me fill up the tank, what a sweetheart, because I hadn't done it in such a long time and never in the States. Right from there I went to meet Jason in Hollywood - yes, Jason's in the same place as me again! This is the third country we meet and hang out in, pretty cool. We had a little breakfast at IHOP and he got an oil change on his car, then we went to Hollywood Beach to spend the day with Mari and her family. That was so wonderful, I always love spending time with Mari and now I got to meet some of her family and they're just such nice people. Simply a great time. I'm already looking forward to the next beach day with her - and Béa!! - when we're both back in Colombia. In the evening I drove up to Fort Lauderdale to meet Eric at the Treasure Trove, a beach bar. Had the most delicious Conch Nachos there! It was so much, though, that more than half of it is in Eric's fridge now, even though he and his friends had some of it. After hanging out with his friends for a while we headed to his house and - how amazing is that - I got to choose if I wanted to sleep in the guest bedroom or on his boat!! No wind, calm water - of course I chose the boat! Actually slept deliciously in there, but for some reason today just didn't go well. 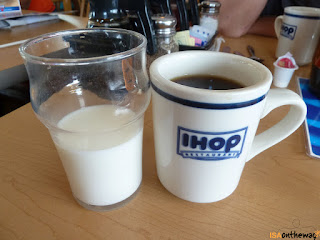 This is what you get at IHOP when you ask for milk instead of Half&Half. 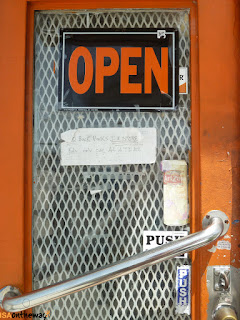 The sign on the door says "No backpacks in store. Kids only one at a time.". 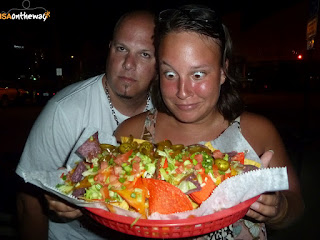 My first reaction when the food came: jaw drops, eyes pop - "This is what I ordered?!" 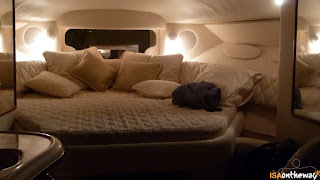 This is where I spent my first night in Fort Lauderdale. Tonight the weather's not that nice, so I'll be sleeping in the house.

Probably because I spent the day being worried first about my passport and then about tomorrow. And because of feeling physically unwell, too.

The first thing I did this morning after getting up and climbing off the boat was to call the Consulate General of the Republic of Suriname, because Austrians have to apply for a visa if they want to visit that country, which I found out only days before leaving Austria. The consulate's website is down, you only get a 404 if you try to access it, so I didn't have a lot of information prior to calling them. Eric's part-time roommate had more information than me and found out that the Consulate only caters to US-American citizens and everybody else had to go to the Embassy - in Washington, DC. So when nobody picked up at the Consulate (nobody there before 11AM) I called the Embassy in DC and inquired about my possibilities. But all they did was tell me to call the Consulate, without listening to me telling them that I wasn't an American. So I had to wait over 2 hours until I'd be able to call again and find out if I could go there or not. Why not go straight? Website down and nobody on the phone, what if the whole place was a 404? I wasn't going to risk going there for nothing.

Eric, Patrick and I went to get breakfast at a cute little place in Lauderdale by the Sea, but unfortunately I was so preoccupied with the whole visa situation, that I couldn't enjoy the place or the nice company. Also, my stomach was being a jerk and even though I tried having a proper breakfast (french toast with fresh strawberries), I couldn't get any more than 1/3 of my food down. Started to feel a bit queasy then, but it was fine.

When we got back to the house I called the Embassy in Washington again and this time they did let me talk for more than 10 seconds at a time, but they said they'd have to keep my passport for 3-5 days if I came up to DC, which I could have done during my stay in Philadelphia. But I'm not giving my passport away, especially not while travelling. Again, they referred me to the Consulate, saying that they might be able to get me a visa on the spot, even though I'm Austrian. After a few minutes of "I'll put you through, hang on a moment" I got the right person on the phone and got the green light to go to the Consulate. So I sent the address to Jason, who didn't have anything better to do than go with me, copied the directions off of Google Maps and left. About 45 minutes later I was parked in the visitors parking lot outside 6303 Blue Lagoon Drive and headed to the Consulate offices.

Getting the visa was probably very simple compared to other places and other passports, but for me it was complicated, because it was my first time. I've never had to apply for any visa apart from the ESTA and that's not a real visa, that just determines if you need to apply for one or not. Until today. Learned something new. About an hour and a half after walking into the Consulate, I walked back out with a brand new visa sticker in my passport and 45 USD less in my pocket, but happy to have gotten past that obstacle.

Jason and I went to the beach in Lauderdale by the Sea, right next to where Eric, Patrick and I had had breakfast. We sat in the sand chatting for a while, but neither of us felt like spending a lot of time in the water. That was when I started feeling nauseous. 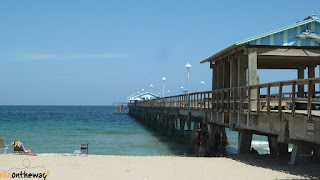 The pier in Lauderdale by the Sea. It's so pretty.

I moved into the shade thinking that maybe I wasn't feeling well because of the sun, but it didn't get better. Then Jason got hungry, so we decided to go find a place where we (he, really) could get food. First, though, we drove around Commercial Boulevard and Oakland Park Boulevard to see if there was a dollar store or another cheap place where I could get a gym bag so I wouldn't have to bring my entire luggage to Philadelphia. But we couldn't find anything and didn't want to ask Jason to spend all this time and fuel, so I decided to abort the mission and just take everything anyways. He wanted to eat somewhere special, in a place he wouldn't find in Canada, so we went on a new hunt. I remembered a place Eric had pointed out to me yesterday, Primanti Bros. on A1A. They have one place in Pittsburgh, where they originate, and one in Fort Lauderdale, so it was definitely something Jason wouldn't find back home. Went there and Jason got one of their signature sandwiches. I had a few fries. 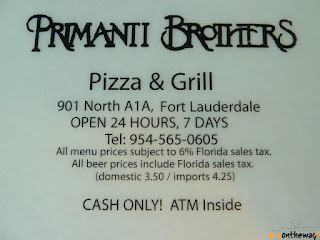 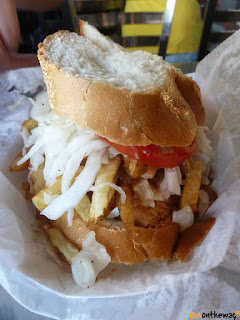 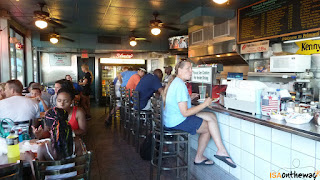 I had been getting more and more tired and nauseous over the last hour and while in Primanti's I actually had to fight really hard not to faint at one point. Jason was so kind as to take me back home (I had parked my car at Eric's so we wouldn't drive around in two cars) and I packed all my things and got my bags and the car ready.

Now, all I have to do in the morning is get up at 5.30AM, leave here at 6AM to be able to return the rental car before having to be at the check-in at 7AM. Then fly up to Atlantic City and spend the afternoon there before going to Philadelphia around 6PM to meet my friend Louizis after he gets out of work at around 8.30PM. With my backpack. <sarcasm> That's all. </sarcasm>

I feel bad about being so negative, but right now I'm just really down. I don't want to go to Philadelphia, I just want to sleep. My stomach still isn't completely fine, even though it's gone from nauseous back down to queasy. I'm so tired right now I feel like crying and all I can think about is cancelling everything and going home. Not just everything Philadelphia, everything that's coming up in the next month and a half. Just get the next flight down to Cartagena, check into the Bellavista and sleep. Sleep. It's past 9.30PM now and I'm so anxious about having to get up early, I don't even know if I'll be able to sleep.

And on top of it all I'm being a shitty guest for Eric, because I'm all tired and anxious and quiet and preoccupied and no fun at all. This is just horrible...

Sorry, I just had to get this out there. I feel like it's only right to tell you the bad stuff too, isn't it? I want to be honest, after all, and this is part of what it's like. At least for me. There's bad days. I'm sure I'll get over it. I'll just do nothing when I get back from Philadelphia. Spend a week in the Hollywood Beach Hostel and just sleep and relax and stay out of the sun as much as I can. Let my body recover, because I'll need all my energy starting August 11th.

I just really, really, really don't want to be travelling anymore right now. Sometimes I feel like maybe I just love travelling, but I'm not actually made for it, not cut out for it. I have to force myself out of my comfort zone at times like today.

The key here is the "right now", though. And the "times like today". It's not always like this and I will keep going and it will become awesome again. It always does. 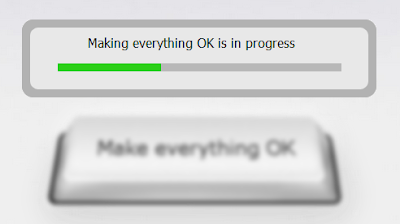 Thanks, Jutta, for the link you posted in the comment on the last blog entry. Making everything OK is in progress. I hope it works quickly.

Posted by isaontheway at 9:37 PM