Hafiz Mustafa in Sirkeci - an experience, not just a café. 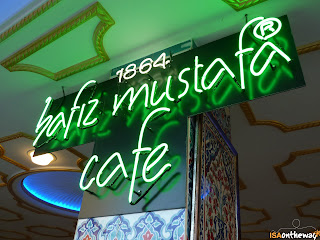 Right next to Sirkeci Gar, the central train station in the old town, you will find the two-storey café Hafiz Mustafa. It's not the only one of it's kind, but this is by far the one with the prettiest location. 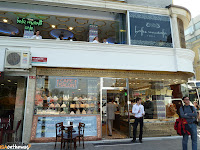 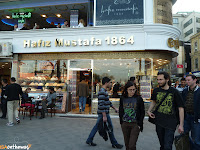 Find the difference between the two photos!! (No idea what's going on there, it's one and the same place in both pictures...)

When you sit on the terrace-like upper floor by one of the huge windows you'll be able to look over of one of the most interesting scenarios in the world: city traffic. Watch trams, taxis, private cars and people snake around each other in front of the train station, obstructing each other's ways but never actually colliding (at least I didn't see any accidents and I hope you won't, either). And further out, beyond the overflowing streets you have a grand view of the place where the Golden Horn meets the Bosphorus. Out there instead of taxis and people it's fisherboats and ferries that maneuvre around each other like busy bees above a flowerbed.

One of the special things about this café is the way the interior is designed. Everything about it screams Orient, which is just beautiful. It's the details in the tabletops, the traditional tiles and paintings on the walls, even the drinks containers and juicers are adapted to the style of the place and melt into the experience. 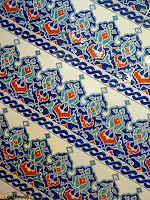 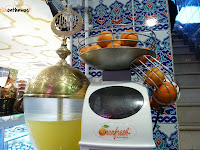 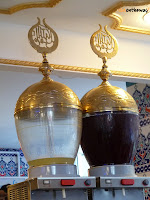 Beauty lies in detail and there's a lot of detail to be found in Hafiz Mustafa.

And then of course there's the desserts and the coffee and tea themselves that add to the specialness of the place, because they're incredibly good... soooo good! No matter if you try a small assortment of Turkish Delight or typical turkish desserts or if you go for a more western approach to sweets and have milky desserts, profiteroles or cake - it doesn't matter what you choose, it's always delicious. The only bad thing about the variety of dishes is the variety itself, oh it's such a difficult choice, because "one of everything, please" is not an option unless you're into sugar comas. 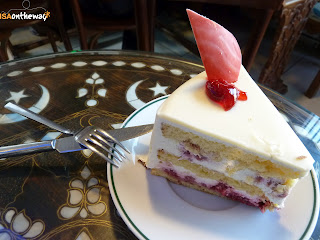 And then the most special thing of all is the service: the staff are so nice in that place, it's as if they didn't even know what a bad-mood-caused-by-stress-because-of-too-many-customers was. And if you're expecially lucky, the head waiter will take a liking to you and switch you to a window table with a view as soon as a table is vacated so you can enjoy your good coffee or tea and your dessert and along with it enjoy the city. 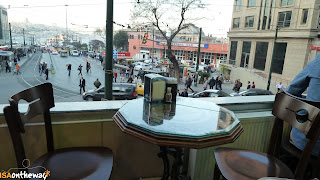 Yes, we were so lucky.

Posted by isaontheway at 2:44 PM