From basilica to mosque to museum: the Hagia Sophia

Hagia Sophia or Ayasofia, from the Latin Sancta Sapientia, is one of the main attractions Istanbul has to offer to the history-interested visitor. It was built as an orthodox basilica, then converted into a mosque and now hosts a museum, but I'm not going to tell you all the historical stuff right here, just go to Wikipedia if you want to know more.

The thing about all this history, though, is that there's this wonderful mixture of styles and artforms and spiritual components in the building. Firstly, of course you find the typical Islamic elements: arabic calligraphy, flower or geometric patterns, colours and a lot of different textures. 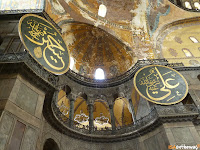 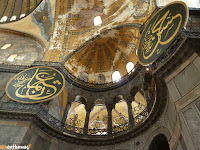 Secondly, and this is really special when you consider that the depiction of people is not allowed in Islamic art, yet there are not only angels visible on the walls of the Hagia Sophia but also important Christian figures such as Jesus or the Virgin Mary. Tons of faces! 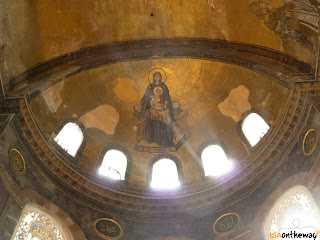 And because it's all so old, there's been millions of visitors over the years... decades... centuries! And the very good preservation of the basilica/mosque allows us to know the following thing: carving our name into walls, stones, trees and toilet doors (among other surfaces) was not a recent invention! In the Hagia Sophia you can actually see a carving made by Vikings in the 9th century!!! Unfortunately, nothing's been deciphered but the name of the carver, which is Halvdan, because the rest is illegible. But it's really cool nonetheless:

Go there and then, maybe some 500 years from now, there will be a new plaquette on a wall in the museum saying that all the researchers can read is your name and the rest is the mystery of your life.

Posted by isaontheway at 2:23 PM